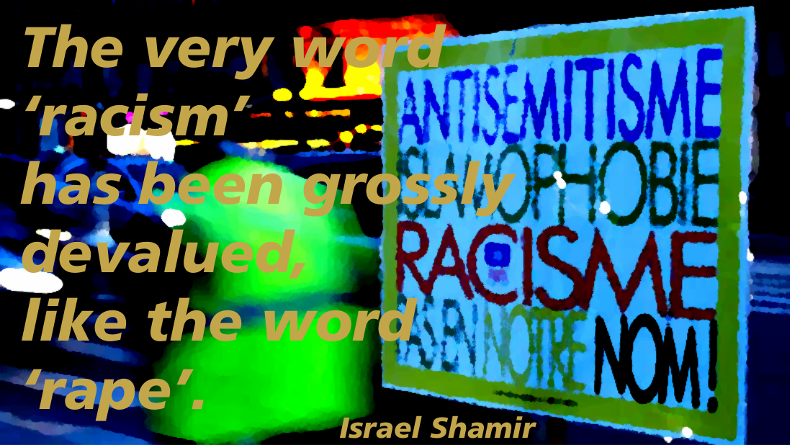 Lights on sirens wailing. Our social -- eh? -- services in a media-conducted trumpeting onslaught and robbery against reason and logic. Against areas of humanity in achieving relative freedoms with healthy and prosperous by-products.

But lemmings, do what?

'It would not be impossible to prove with sufficient repetition and a psychological understanding of the people concerned that a square is in fact a circle. They are mere words, and words can be molded until they clothe ideas and disguise.'

About re-defining terms and definitions to screw up all but... the un-screwable. The camouflage and about protecting; The vulnerable, the minority, the weak. Keeping those "nasty extremists" at bay. Helping "our children" become one with all and, "we say" need positive discrimination.

Writing here, as though there's a... voice behind and a central hand up the BBC/Guardian and all etc. puppets? The same divide and conquer song, so why not a unifying clump.

Different appearing dialectic, same approximate and toward impoverishing-outcome. Red, blue, all colours of the prescribed rainbow. Allowed mainstream media spotlight -- can do no other.

The masters of the manipulators are no doubt into what?

Three words, and to even suggest this is happening gets a send-off. As Cook on The Unz explains and Williamson's "piss-off racist scum" red-card. Get even close enough to trouble and you're done for. Cook's explanation, on a witch analogy:

'As with all inquisitions, however, the witchfinders were not interested in what Williamson actually said, but in the threat, he posed to the narrative they have created to destroy their enemy, Corbynism, and reassert their own power.'

'So his words were ripped from their context and presented as proof that he did indeed support witches.'

'He was denounced for saying what he had not: that Labour should not apologise for its anti-semitism. In this dishonest reformulation of Williamson’s statement, the witchfinders claimed to show that he had supported anti-semitism, that he consorted with witches.'

Intensified these first weeks of 2019. Been brewing up for years and now spilling over. Growing heat and hints at the coming, the monster bares its book-burning like fangs. A suffocating slime over public communication. The cover-up of cover-ups.

Class warfare? More pen and sheep and three stages; 'Don't or', 'must not', and finally, 'can-not'.

Much depends on the rare and full-on, honest appraisal of the situation we're in. Fooling along with the fakery because it doesn't suit our particular idealism is a death trap.

No anarchists about. With socialists in the main and supposed radical, off-deep in confusion. Dubbed far and right get hit upon but happy and the counter-intuitive. Served by the persecution and their most effective crowd-puller.

Awoke-lot, less/not, into the con and constructed paradigms and over the show-time. Lots about 'eating' each other and attention upon. Too much chit-chat about not as reckoned as orthodox about and their exposure.

The internet is like a classroom or a school playground. Again... let's go; Suspension, Expelled and finally, a Young Persons Detention Centre. Or, in conspiracy theorising parlance, a re-education camp.

All obvious and predictable where we're going and, or unless..?

Until and eating out their dog bowl: Papers and TV spew its barefaced bullshit and the bell ringing for a new round of shut-downs. The prior stages and warm-up to an internet dark age. Oh, and in the larger less independent work-place, new terms and conditions.

Not having the screaming abdabs and temperature a-rising and what's occurring is drunken-like. The fog having descended. We're social-living deviants and complicit destroyers -or- misfits?

The few maligned and fellow slurred-upon and ostracized. Better by far. Look to... and ask, claims-alive-here Jesus. See what?

Because... we cannot actually care, about the society we UK-wise inhabit. At all. No left, right -- if that's what, into -- excuses or cop-outs. IF, we don't talk about, the claimed-unmentionables.

Be casual and pretend it's not happening? Not acknowledging the pace and trajectory going is toy-town level, nursery-school, understanding.

Listened to try-find best talk challenging freedoms and minimising corresponding alarm. Tried 'Three Arrows' and 'The Marketplace of Ideas'. And; what happens if someone/s uses it to take this away? But as ever the frustrating less-than awake perspective. Languishes and holes, lacking a depth of coverage.

OK: Try do the word 'Racism' and let's have a look at some moving goal-posts.

'Prejudice, discrimination, or antagonism directed against someone of a different race based on the belief that one's own race is superior.'

Would still say it's rare and in the pure skin-colour etc. The "all them lot" form. A recent upsurge could be been about -- said to be -- Islamic-led crimes. 'Said to be' = believe the flags waved and shy off from evidence are false. Or call, what have you, done by Muslims. While those who most should know, say it's cultural and biological derived ones and not for real.

Having lived in the inner-city and now a country town, be hard-pressed to find much or many into racism. Pushed and might have an opinion that's protective and concerned but not out and out, all and about one 'race'.

On the berserk box and bad-bad newspapers, it's any talking ethnic-based nationalism? Political ideals into better off we don't mix and fail in multi-cultural type thinking. How about a discussion on superiority in intellect or culture and what's race-specific. All these, can... be racist or more the point; somebody, can be. Does it... have to be though?

Sticking with the standard definition and two aspects:

First, come the intent and outworking i.e. the presentation, tone and manner. Second is about the basis and blanket assumptions of 'superiority' leading on to what? -- is the question.

Could be a subjective perspective, that becomes the R-ism, in how it's handled. Back to the first bit: The expression and application, the consequences and hostility.

How about meeting a racist/ism and my experience?

Only one comes to mind in recent times, someone mumbling a word/phrase. In a kind of act but try sounding natural manner. In 'polite company' and was a bystander of sorts. It wasn't at all bold or loud and presumably in the perverse thrill and like to think, can get away with. Said in a half-joking, kind of slight of a derogatory hand. Very much slipped in and the use of an old fashioned and somewhat soft term for 'black person'. This all.

Kind of ha-ha yet with their naughty-boy look and knew there's more to it. Seeking the need for acceptance and the desire for affirmation. Could be though, forget himself and hangs with a bunch of we-speak-like-this types. On another occasion, this same person -- who's a cabby -- banged on about hating only one kind of customer; "damn loud Yanks".

This did address and sought to explain the psychology and sociology of stereotyping. Not taken. Blathered, the consistency of his experience, proved the case. Got he's into races-over-here-the-trouble philosophy but think it's telling he swings 'both ways'. More all-ways and any nationality for lump together and confirm it's as good as colour and certain.

Otherwise... not met it much, if at all and met capital R-racists. If we're talking pure colour/culture based think less-than because and why.

Plenty that goes that way but comes from underlying prejudice and slag-off mentality. So had it this way. From some black people and mates of sorts, knocking my white low-down ass. People who are clear Race-ism is the cause of their community downfall.

Too many cops and authorities taking it out on their colour-seen. True enough and can be. Better-ish these days -ish but the put-downs and beat-ups, run deep. What might this cause me to do? Get into stereotyping back.

All in all, we live in a gagging-to-be critical world. Indulging in the cheap mental slapping down of each other, or nagging on about another to another. Saddo stuff and think it's best-can curtailed.

Back to skin and shape, ethnic and minority? Again, there's the slaggy context regardless but it 's the projection from media. A wind-up that's too often underestimated. One sick contrived mess. A critical contemporary put-on and put... down.

Race and/or sex, and/or tranny -ism. It's about to push two sides and seeking the conflict. Legitimate to stand and shout against authority-based proper-unwanted-gander but goes too far...

It's then the purpose of the central-scammers achieved. War-makers mixing and managing intended social-unrest. Into our heads, and on to monitoring results, and steering outcomes.

The deepest of the cabal with religious/philosophy promote a vision to engineer. Next level and seen-elite, pissed on finance and power. Could be access to the sex god and more often into chemical substances for fuel.

On a train, once on, unable to get off.

Again, shaping the left/right facade. Or named, whatever derogatory slap and -ism, lobbed about by each lot, toward the other.

All shone-up through media-led projections amplifying difficulties over differences.

Bright artificial lighting on weeds. Isolated out the ground and streets environment. Planted back in our psychology and outworked in society.

Told we need better vision and must face the problem and not shy away. So switch on the lights. And so low and behold, troubling trouble, the struggles grow and metastasize.

In our heads, and out in supposed or otherwise symptoms.

Need to see the actualities and the buried, not take a ride on the negative feedback loop. Two sides stirred by a collectivist, you-need-more-nannies prescription.

It's a nasty trick by the elite behind the elite's in power who hate true coming together.

The latest piece by Hoffman on visiting 'The Nation of Islam' is one moving documentary. Cause for celebration or... be a squirming divider and discerner -- a who is who and where we Islam-at?

How Muslim peep where-can making moves to 'be at peace with all people, as far as possible' as the Bible-commends. Gotta be the right standing need on Race-ism. Which is more often Culture-come-Religion-ism. Can't say am that surprised at his take, having lived among neighbours into 'Islam' in a poor-ish setting.

Talking racism. Impressions from pop. and sicko media to whip-up nonsense for from said-Right and yes, the Left's extremes. Mirrored by the unique and fate-drunk of Evangelicals to State suck-up Progressive's version.

Jussie Smollett and Jewish Hoaxes. Begins on a premise or should say, ...hope. That, debunking may yet change the trend of baseless accusations.

Goes on to assert; The very word ‘racism’ has been grossly devalued, like the word ‘rape’.

Of course, it could serve the opposite outcome. Have some considering the standard of proof of a real incident is lacking, causing them not to go to the cops.

Other questions are about levels of threat and how many generally held -ism-ing. Oh... and lest we forget and top of the pops these days, the unique category and hatred of Jewish people.