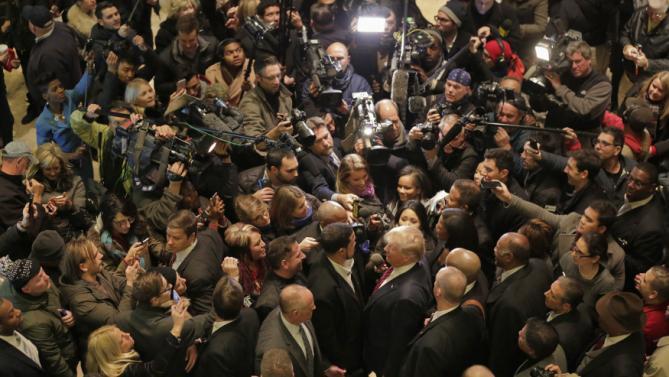 An awkward dilemma just got larger for liberals, left/right-ers and elite, with no small consternation for non call-me liberals, or nout.

Protest vociferous Trump, with dismissive tones yet all-so-calm in what’s considered the territory of the obviously smart(er) and fan them opposition flames. "No debate here" because thus untenable and on goes more petrol...

This goes - but they get less credible copy - for the growing immigration-belligerent.

All because ‘no platform' is getting wider by every mainstream frenzy

The left (let’s keep it badly over-simplified), see themselves in a battle to destroy the right. Thereby, win converts and viva la’Rev. The right are the posh, with what’s traditionally seemed like few-ish inner-city bigots and many oldies. Add the politicos and bankers-media who whisk up ‘Tory times’, cajoling the middle don’t-so-care into votes. Ostensibly in reaction to perceived failed red-admin, said warped policy, futility of running the works themselves and not allowing the competitiveness of private enterprise. Once back to Blair and like, a slow(?) process chipping support, for the next - change as good as a rest... and... bring back the blues. (John Smith might have been a different kettle of fish? And - gets me no votes - “don’t vote”: Never given a choice worth bothering with).

I could caricature on but we‘re moving into new waters however poor an analysis. Call us, (let’s say UK-wise) what you like, the emerging dilemma had neons and bells put on because: Donald lays a trump. Damn fool talk to allow this to fly: A ‘total and complete shut-down of Muslim immigration'. He could have added ‘without more stringent background checks’ but doubtless, wouldn't satisfy the baying crowds comparing to Hitler. (Why always and only him?) and “we don’t engage with Nazi or Donald’s opinions”.

Someone close got angry with me about all this. At least had gumption and guts. Skimming over The Independent calling loud and proud to ban Trump from the UK (is he planning a visit?). Same rag, there’s this: ‘Why we should be scared of Marine Le Pen's Front National’. I assume same would be said, ban this “French fascist”.

Trumps talk of restricting the ‘net’ is scary, views on immigration, a debate. Surely, two views/two categories: Freedom of speech and the net, within the confines of where the law stood (not as it’s now being bent). What's not precious to humanity is censoring dissent and disagreement? Again, little substantial big-public media debate but it’s; yes stay as, or? A straight forward choice.

Immigration, and specifically Muslim believers (obviously Muslims aren't a ‘race’) and currently perceived threats (obviously not terror’s bosses)? Surely we should talk? Not, ban or not, the talker? In the face of all those of those of Islamic ‘faith’ - who've done me no end of good - for one and all, we must engage for consensus and wider consent.

Discovered Bill Burr this week (barely do arts and culture...). My inspirer for this site has me moving this way. (So watch out for more Chess and Bill’s on TS). Barr is quite the remarkable laugh factory. Bill/my interpretation:“Disagree to the uttermost...” but ‘if’ - big question (I’m un-concluded) - DT is free (at all); “Is the honesty (?) and the irritation for some and controversy for many, worth it?”

Knowing, who-and-what-want only one overriding goal: batten us down, push us loading and firing verbal and broadcasting weapons, eventually move us towards the physical, to riots and... don’t pass go, go straight to jail.

Or we talk? Better.

‘We’ and this Trump. Don’t expect it much, unless DIY. This platform (Silvrback) is thirty quid a year. Ya type? Know people on your block or social media who’d read it? Get local and ‘political’? Care about Muslim migrants/refugees coming or in gate-keeping? Care about tomorrow?

Certainly not down to Donald or his trumps.