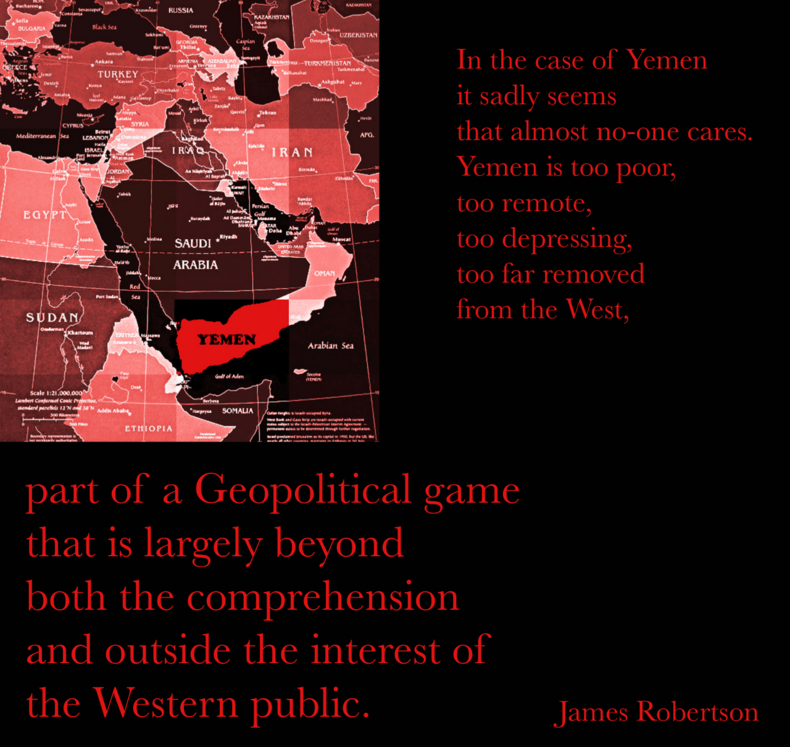 Yemen – where to start?

How about a retrospective, horror shows-us-up, from Crimes of Empire?

A meditation to face this more often buried below 'other stories' and concerns, AND... what are we, not getting loud (enough(?)) about?

This review over twenty months is what's needed: With the images and video showing ' The Full Horror of War c/o James who confesses, straight after the quote used in the image above; Almost all of my life I would have felt exactly the same way. “It’s too depressing” I would tell myself, “What could you possibly do about it?” etc. So I am not pointing the bone at anyone here but trying to state that this is the way we are in the West at this time.

Early April 2015 (updated later in the month): The Saudi Attack on Yemen. Note zero comments. I must have read the earlier edit and '21 days bombardment' and how I found there was little reporting and almost, no, public awareness. (Did some one on one research).

On May 9th we get; Saudi Attack on Yemen: Residents of Northern Province Told “Leave or be Killed”.

The 22nd it's Saudi Aggression on Yemen Renewed. Next day, Mosques Attacked! Sectarian Mass Murder in Saudi Arabia and Yemen.

By June 15th, James is rightly speculating on the unusual appearance of the explosions; The Nuclear Attacks on Yemen.

We read; The so-called “Coalition” attack on Yemen is now into it’s eightieth day or so having started on March 25th..Saudi Arabia and their entourage of lackeys and prostitutes have killed thousands of Yemeni civilians over the duration of the attack.

April 16 we get Vanessa Beeley/21Wire, highlighting a most remarkable 200 Days. (My comment 'If Syria's about lies; Yemen is about forgetting').

Finally (oh and when,Will we get to see some...finally, stop this racket: Those fuelling and doing these crimes upon crimes). Words fail us to describe, what should have us, in a state of emergency-alarm. Black lives matter? Where's the protests here? Oh I forgot, too...

Not James, Saudi Warplanes Massacre 140 in Attack on Yemen Funeral, and Vanessa Yemen: The Anguish, Bloodshed and Forgotten Heroes in a Forgotten War.