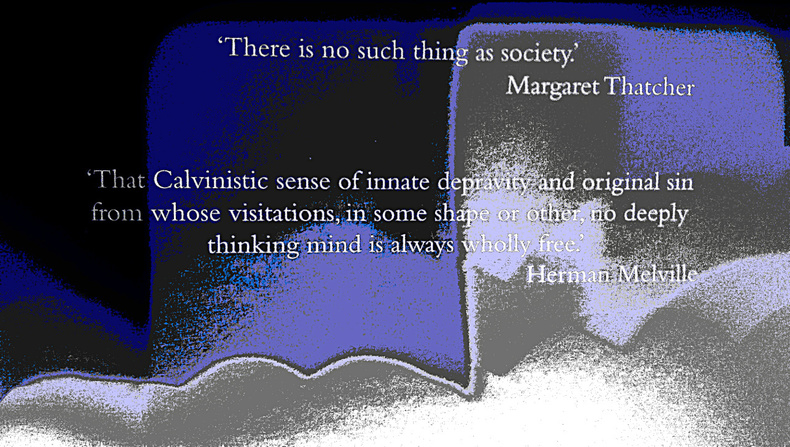 Somewhat blames God. Puts our weaknesses and failure as some 'thing' rooted inside, rather than our wholly free response, to our in and, out – side. Sure, there's capacity issues every which way. But by necessity given us? No, no, no. We aren't made to mess up.

Some have sought to make this – seemingly written in Biblical-stone – a redeemable aspect of a Christianity, they don't believe. Because it puts the breaks on a Humanism, that suggests man is idealistically without limits. And in their mind, histories primary, religious casualty-causing ism.

Others like this book, I happ'ed upon today (I. Walsh/'Skagboys'/image above/opening quotes), believe the overhang, as Melville writes, is wholly trapping.

How this came about being attributed to the Bible, this 'born with' belief, is under a shaky umbrella called Calvinism.

Commented on Memory Hole – On Modernity, Morality and the Satanic Sacred:

One challenging think-along. Being able to question what needs. I’m half-way through but gotta stop. Will return and might comment again, but ‘amen’ for making-me think. The background is often beyond my limited educ. Feels brave, not only having on a proper hard to follow Philosopher, but one who thinks seriously about God (and a traditional ‘one’ at that). Diversity, one way we can keep the life of free-speech alive, is expansive on Memory Hole.

I’d like to hear him/you (perhaps you do), talk a little bit about Christian theology, and how this shaped/s wider shores. His passing comment about ‘original sin’ is one often looked-upon assumption (is ‘in’ the Bible), an example, that needs re-thinking. Yet, what ginormous influence this had. More and on.

Overturning whatever can. This is what I got so far. Like getting air in the soil.

Inherited guilt came from Augustine's reading of the Latin version of Romans 5:12, which in this mistranslation/reading of in him makes 'we' all, as somehow sin inside Adam, is passed on.

Not he died because… and so do we. In our spirit(ual) death. Unless… made alive (again).

No, we're passed this sin-thing through Adam's genetics or what have you. Sperm. Hence said, Jesus-not, sinful.

The pull-back and what's going on, is 'a God' who says, we're stuffed from the off. A twist, a bug, fault-line. Depravity. Not, we have the capacity not to, and right-to, as did Jesus. Who unlike us, every first and last opportunity to love and live light – did. Can we? Yes. Without God's help? In theory, again, yes. Want to find an example? Well, unless Jesus was behind the recordings a hypocrite, his 'what we must do', he appears to fulfil. Us? Best of us? Etc, etc.

Wholly free through God in Jesus. What a promise eh. And can it be?

God forgives, comes in – and we get on. Like never before.

Source for this kind of thinking. A quality printed updated paperback available here for a fiver/on sale. I bought both volumes and they threw in another cracking book, as a gift.