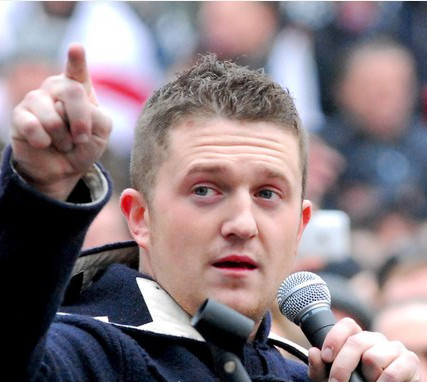 What good would banning Muslim immigration to the UK or not rebuilding any more mosques do?

Provide a huge boost for Islamic practice, that’s for sure, and - those who might seek to be violent. Oh, there’s more, cause protest -and- anti-protest marches, fights, riots and the rest. And young people, post-code gangs, become ever-more race-based.

And how is it gatekeepers decide who’s a Muslim? Surely, from a more nationalist assessment, the terrorists are already here in numbers and weaponed up? How many does it take to do the terrorism, that any attention to detail, should seriously dispute has happened in the UK?

Tommy knows full-well about false-flags and is far too street-wily, or whatever else, to believe they’re not. Yet, he still persists in dropping the mainstream narrative. He knows he’s earring on, “well I don’t know... could be...”, underneath disconnecting, aka lying.

Aren't the arguments that ‘Islam is destroying Europe’ big and strong enough to leave this out? Presumably not, so he loses ground with all but the sheeple.

‘No-go-areas’ to whatever extent are for a patchwork of reasons and across all lines. Putting on a pedestal so-called Muslim areas, chooses to ignore the others and the ‘whys’.

Yes, the grooming gangs for sexual-abuse stats speak and there’s issues around integration and separation. But on the last one, I thought we all understood this was pushed in by historic, multi-culture-over-the-top policies from above. And the perpetrators think-tanking away, knowing the outcome.

Let’s do a big-big pretend for Tommy. Suppose there are divide and conquer motives and forces, off camera, outside the output of the chattering commentary? And it’s they, who’re most intent in destroying Europe as we have somewhat known it: All and any, nationalist framework and freedoms? What might they want to see? And how might they move this ahead?

Ban Muslim mosques and visitors, maybe? And be right behind this call?

Somewhat-nationalists like me, see the two sides, ‘ban ‘em vs no-borders’, translated in Bill Hicks’ Puppet Show. It's not to suggest this is all-comparable, to the mainstream left vs right charade, portrayed here by Bill. The question is, do we seriously believe, they're not working the less/no-borders - and - 'ban' talk, for their sick, lost, ends? Pushing Govt. - presumably - to legislate this ban, out of a groundswell of public outrage, is very establishment anti-liberty?

What was the last likable 'for the love of UK' law passed by the UK Government?

I’m only part-way through Tommy on Infowars and struggling. (Will do the full bout).

I get the desperation felt, the push to find a voice and vehicle, for some meaningful participation, in the process for better. The PC surge, anti-white, all that and the other. Discussion and debate that’s not marginalised out the mainstream. Go that, but...

This being about ‘ideology on a culture’, so say those so concerned about Islam causing ‘the’ troubles, begs; ‘who’s ideology’ might this be?

Without furthering laudable goals, calling for banning is music to big brother's ears.