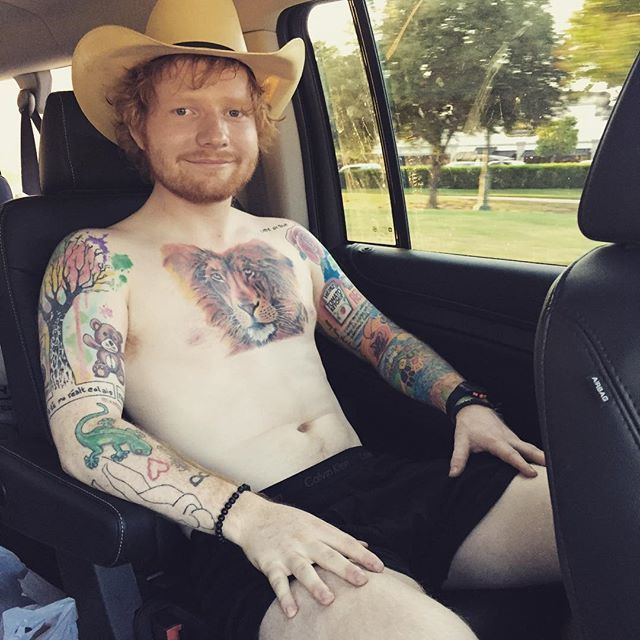 But... for good reason, writes Madeline Hill. Thank phew for that eh.

Well hot-diddly-do.Who said the awakening’s in the sludge? Most countering of moves. What, Ed couldn’t get a helper to maintain his ‘personal’ social-media touch?

His statement on this shocker, I’m taking this opportunity of not having to be anywhere or do anything to travel the world. To my family and friends, if you love me you will understand. To my fans... and goes on to plug the next release. Now he’s off their friends and follow list, maybe this slip-in-sell is compensation-time.

Ed (tat and raw above), is doing what must be the most obviously troubling move from control central’s perspective. I’m surprised his contract allows him? Who said the music ‘biz’ is all - just, that. Of course isn’t that harmless, if only it was, we’d be those "foolish conspiracy theorists" or waste-time fighters. Sadly - not.

Some inner-city anecdotal research amongst surprising oldies gets, “I don’t (really) do the internet”. Arty and/or go-getter types with something to put out there. It could've been coincidental, these three or four relatively recent encounters, but my thought is tides-a-turning. And perhaps it never reached them.

Net backlash, and specifically social media, and I’m just on and twitting?

For me (and if look, others), t’s not so much the media itself, (although plenty prob’s there) - but the screwing to epidemic, our lack of commitment and courtesy in communication. More, in this case, makes for less... civility.

Ed might be simply bored of 'talking' to his followers, has sufficient integrity to want to read/watch back and also likes the striking out ‘my way’. Most cynical take would be a form of reverse psycho-advertising ploy. From the top-floor. And the usual monitor opp.

As a type this, switched on AJ for at least a start-up/shake-up few minutes. Begins with this and talking celebrities on the back of. Here’s what, that-Geroge:

There's a reason for this, there's a reason education sucks, and it's the same reason it will never ever ever be fixed. It's never going to get any better. Don't look for it. Be happy with what you've got... because the owners of this country don’t want that. I'm talking about the real owners now... the real owners. The big wealthy business interests that control things and make all the important decisions. Forget the politicians. The politicians are put there to give you the idea that you have freedom of choice. You don’t. You have no choice. You have owners. They own you. They own everything. They own all the important land. They own and control the corporations. They’ve long since bought and paid for the Senate, the Congress, the state houses, the city halls. They got the judges in their back pockets and they own all the big media companies, so they control just about all of the news and information you get to hear. They got you by the balls. They spend billions of dollars every year lobbying. Lobbying to get what they want. Well, we know what they want. They want more for themselves and less for everybody else, but I’ll tell you what they don’t want. They don’t want a population of citizens capable of critical thinking. They don’t want well-informed, well-educated people capable of critical thinking. They’re not interested in that. That doesn’t help them. That’s against their interests...