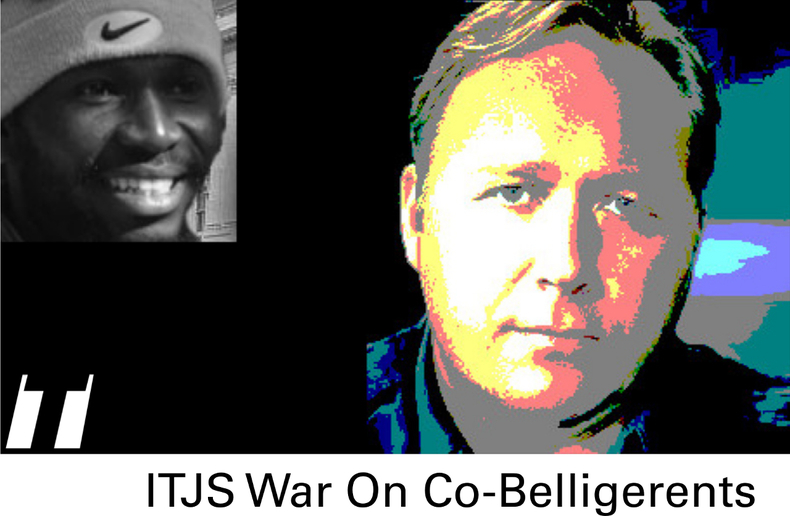 Instead of doing a little research and providing counter-arguments, most particularly on the Middle East, Jones has chosen to poison his listeners minds with crazy things...

In a line: “It’s the Jews stupid” (ITJS) and persistent understating/ignoring this ‘fact’, is complicit and pretends to fight the New World Order but ends up agreeing (directly or indirectly) with the principles that make up the New World Order, now manifesting in views on, “Muslim terrorists” and the so-called Syrian refugees.

Jonas is clear, Alex is an Israeli defender and puppet. And woe betide one and all, if you haven’t sufficiently crossed over to ‘ITJS’ VT-and-like orthodoxy.

Then we get questions about his support or safety in sarcasm about angels, and assume agreement that Alex is an, operative for the Jewish money power, because; Timothy Fitzpatrick actually went behind the scene and exposed who those guardian angels actually are.

Makes little or no sense and any amount of convoluted thinking cannot change this. Non-circumstantial evidence would overturn, but not conclusions only wrapped up in his opinions.

I say ‘of course’ because there’s no rational. The ones in this ‘scene’ who might be, make no bones about their allegiance, openly operating O Israel: Christian Zionists. For them, it’s all about proclaiming this faith. They don’t consider they’re agreeing (directly or indirectly) with the principles that make up the New World Order but...

Previously commented a number of times, it’s not the Jews... or Zionism... it’s the foundational ideology: The future is already written.

This drives the beast and believers to visions of Zion made by men. Don’t read anyone Truthering up on this? I’ve always thought Jonas would be one to tackle it, perhaps he has in one of his books? Suspect, like Alex though, he thinks it’s more fixed and so - let’s not trouble trouble. Alex is a loud-one on free-will, would Jonas concur? But like Biblically-based traditional same-sex beliefs and gays having ‘no-chance’ with God... hell everlasting fires. On a number of controversies Jonas and Alex keep it down.

Intended to labour away on this, try make an impression. Put a comment on VT, all links back to... me-me-me. (Is this, why I’m writing? I sometimes wonder?). I read this provoking piece, shortly after putting up a post from Alex. Feeling a bit down and bluesy, so one remedy: Team-coach Jones for a pick-me up? Hence, You’re the Revolution.

Jones the divider, well-known hated Truther, bar none. He doesn’t need a defence and anyone listening to the context in which he speaks, would get an altogether different impression from Alexis observations.

Decided otherwise on aping-Jonas, best as might. Will do a comment here and there but my overall sense is, if I bash too hard and long, I’ll do no favours. That Jonas would see this piece as VT-destructive and comes back on his own credibility, and Alex might check some of his current thinking regarding Muslims, or I reckon, expression?

As for readers, it should be big discouragement to see another spokesperson squabbling. As for the enemy... must be lovin’ it, a cathartic frustration-gush, sowing more discord. And ..TJ’s on the top-floors will surely raise a glass that we are getting on with in-fighting.

Quick Bible-thought? (After all, Jonas and Alex are ‘believers'): The poem about beginnings describes ‘the knowledge of good and evil’ as a tree. A personality from outside humanity and not ‘of God’, exaggerates what God said, whilst tempting the person to ‘eat’ this ‘knowledge’. The glib anti-Christian and Illuminati take is it’s about God wanting to restrain our understanding, insight... Knowledge - and the shiny light-bringer for liberation. Any scant reading through the rest of the books, finds everything saying otherwise yet - echo something central in this original revelation.

Do not judge, said Jesus, yet ‘judge justly’. Herein is an interpretation:

If Alex was an operative, the crucial accusation, we could be right-standing about it but until there’s legs on the claim, it’s our all too often, shameful ‘knowledge of good and evil’. We're suggesting God-like perceptions - when not. Does Jonas know Alex’s heart?

He could write to Alex or call his show, but you sense he’s “done with him” and this isn’t about asking Alex to reconsider anything. It's all about throwing him - again ‘n again - on the rubbish heap. A trumpet of outrage. He mentions Paul JW but really he's speaking to all who ‘dare’ assign the troubles described 'Globalist' and not “ITJS”. Or as most do, mix the two, but not always feel the need, to name, name... name... the J's.

Alex is a man who looks at the prison planet, detailing what's happening; down the type of hinges used on the door, how much water comes our the taps, which cells have who in, to who's doing and saying what. Yet, because there's a degree of debate about who's the governor, and who might be running the office, his work is said to be a complete lie.

He has his own - more recently emerging - emphasis about Islam, and a long-standing position regarding the elite's Jewish backgrounds or identities?

Well, because numero uno voice, wont appease the militant anti-Zionist wing. Fair enough, and a good job it's there, but why the need to attack others, undoubtedly doing good because - they don't or won't promote this line? Transference or projection (one of them two) - I don't know... but shooting wounded, war on co-belligerents, makes-no-sense, which ever way you look at it. Mostly for the shooters.

Bible Paul wrote, watch out for those who cause divisions and put obstacles in your way...

Alexis's assessment could’ve been helpful,hope next time it will be.

All got a bit long on the comment score so here it is... (not sure how to drop an Ad/signpost on them ?)

Amongst ‘doing any offensive good’, let’s give it a 50/50 split re; name-J’s -vs- either don’t so believe this, and/or, won’t spell it out. What does someone like AJ do? Let’s suppose he’s choosing do his best, not to lie (ok, omission not commission). To push a line that doesn’t incur opposition and lose millions of followers? Yet stays within plenty rooms of truth, he wants to investigate, and war out. Moon-landings (believe or not), Holocaust etc etc... if he came down on ‘that’ side it would cost far more, in his mind, than gain. (I have my issues he might like to open up about, but hey, I’ve come to the conclusion: The wider good fight matters more than trying to reform some ‘scene of research/activists’. I also know this would have to involve the right time and conversation to get over what I see as light missing. I'm not sure Alex is so bothered either way, or at least in what he would do with it, if he did change his mind). He also, and this relates to Palestine, evaluates what’s getting coverage and likes to mark out his own calling and track. He never claimed to be a kind of ‘BBC’, the T..... BC.

Having seen this J-view grow in popularity over twenty years and face many promoters-of ‘wrath’, says he considers the outcome a reduction to Israel and Jewish people, (isn’t that the ‘better’ term?), on almost every question, regardless of other elements. His point - to the detriment of these other questions and areas of concern.

Maybe he’s wrong not to give more ground but he’s understandably not one to be bullied into... Bull a bull? Whadya get?

The theory he’s the perfect cover “so near yet so far” is this frustrated gripe? Man runs a broadcasting network having hundreds of the most diverse guests. That’s him, is he stopping, (or doing what VT and like do on the converse), discouraging viewers to lob at, and lobby against, Zio-vision? The argument is, he’s doing this by his silence.

Sure, he’s somewhat evasive, and - although not such a listener this last year or so - over three or four on the clockwork regular, I’ve heard; “let’s talk Hitler... How about Auschwitz... What about 9/11”. He’s not ‘that’ evasive. On 9/11? “Are you saying they - directly - had NORAD stand down?” he wearily interjects. His tired and jaded on Is-etc. Who knows what he privately thinks and he’s got his prejudices (ain’t we all?).

I mean, who is it that listens/reads infowars that doesn’t understand the ‘it’s the Jews’ argument?' How’s Alex making any negative difference to that enquiry and action?

Thing is, Alex changes with the winds he chooses to blow with. This turning and more calling out Islam, he admits a change on. What does he get for that? Tenacious criticism but friendly engagement, or blunt hostility? “How dare he?” Like ‘he’ is now getting something wrong? I thought ‘he was all wrong’? Which way is it?

Perhaps he also considers genuine anti-Semitism is a danger, and is anti-ism, accept rulers-ism and wants a ‘time for peace and - a time for war’.

For all his gruff and growl, Alex Jones is too open to diversity for ‘these parts’ and yet VT has shown this with their occasional off-message voices or let’s say opinions.

Take Alan Hart’s incendiary comment on VT in the context of the mental health of certain revisionists, I’m sure Alex and co share this concern. The subsequent VT post lit up the comments, so if truth naturally prevails, was Alan’s comment, better or worse, for any J-centric target-ers?

Is Alex, you or me, or Alan, so free from our understandable angst, hitting on mental unwellness, in the midst of this war?

Personally, I think Alex is for Real, as he says. I also think, like me and you - struggling away in one pressure cooker amongst the mass sheeping.

Man’s a hero (hates us saying that) - but that’s me and the millions. Sorry about that critics but we got taught Big by this encyclopaedic-big mouth and mind, rocketed-off, by him and guests. Oh... but this is all part of ‘playing into the enemies’ hands eh?’

Take me through it A B C Jonas... please fella, you want to explain and convince there’s a positive for the above article? Well this, or there is, actually... but still.

Could you exercise yourself a bit more please, and quote in context ‘what’ he’s saying, that’s so counter-productive or outside a reasonable ball-park of consideration?

No, Alex is all, 'start a fire then throw cool dismissives he matters'.

I think it hurts Alex, this kind of writing and choir-ing comments. Not so much personally, but for all the people who, somewhat or tons, appreciate infowars - being “told-off” for disagreeing. And those who read it, and take your authority and encouragement, to start slagging off their mates, (it should be ideas but ya know what...).