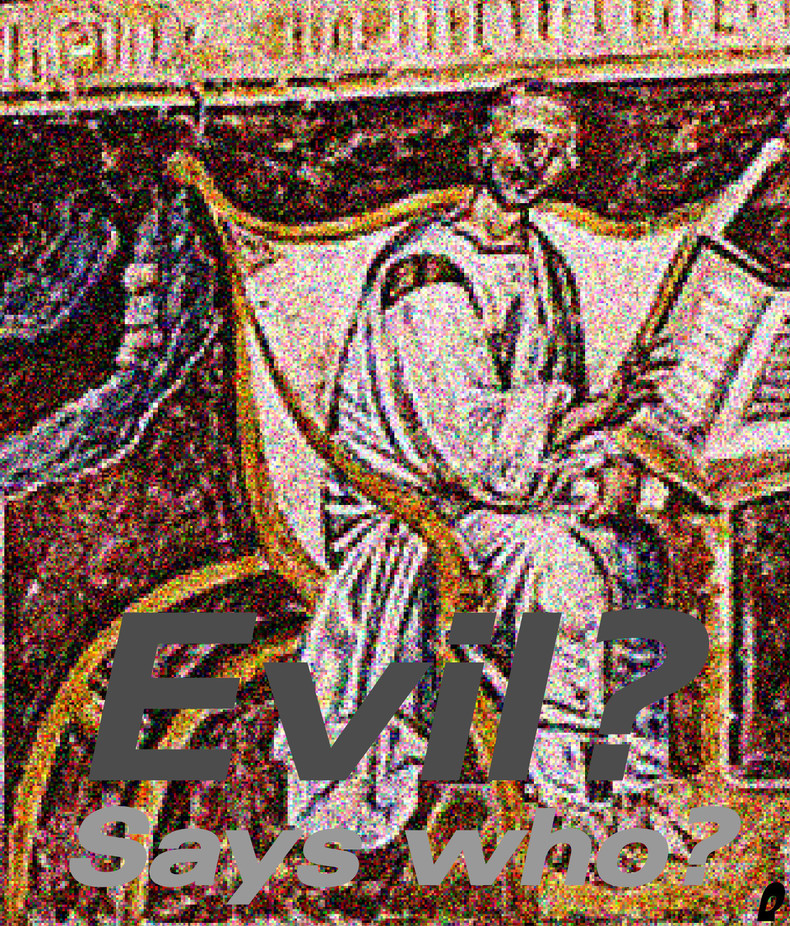 On reading Giles - not unsurprising - views on evil, I wondered if the ten of thousands reading it would whimper a thought? Now on a Twit, searched #gilesfraser to find, Is Giles Fraser Cursitor Doom?, a repost (on an auto-collect) and zilch.

I had to look up what ‘cursitor’ means ‘courier or runner’. The Lone Star blogger managed ‘Crowley looking’ and pro-gay as links to the NWO. So what and so what to that, with respect.

Giles does speak into - (‘not’ knowing-so, my guess) - NWO deep-religion. All about evil 'course and their presentation, flood us with ‘go-easy death’ and repetitious meditations on serial killing (I've taken a look at TV/not a normal practice).

I’m still working through, if Evil Inc agree with Giles, me, or some other variation?

Perhaps a sub in their midst, younger or newer voices, attempting to somewhat reinterpret - what is - their grand deception. (I mean one they’re 'under' but yes, the one they infect us with). Rumour has it there's a split with Lucifer lover/haters .

So where’s the get up and stand up at the Star Wars deconstructing critique Christian-wise? You'd think the church of all peeps, be jumping like a Jed?

I now-realise (new on), interested hordes exodused Twitter. Ones lefty (typo that, but I’ll leave it...), are maybe all a touch jaded-off? Still... 'no comment’ shows remarkable, and dire signs of times.

When concept-evil couldn’t be more shoved on us and therefore, a more prescient question. Because there’s... Islam(-ers) or .... Nationalists, take your pick? And sadly not so much trying to stand in both sets of shoes. Think twice eh. I say that on a glib one but isn’t this the sometimes missing nuance? How about evil ‘I’ and evil ‘M’ / good-sides to I and N talk?

Back to Giles. The good side of evil? Ok, he’s not writing that, but... out of good-comes all? Including evil? And God is good? Evil only ‘us’? Or, maybe Giles thinks God is a bit of a duality?

Certainly ‘duality’ thinking, isn’t only liberal theologies root critique but the 'believing of', they claim; the churches self-perpetuating prosecution complex.

On Star Wars: I don’t do (it) but anecdotal and reliable it seems diclosure, is that George Lucas is one of the only top-Hollywooders who hasn’t been too guarded in talking about the NWO. Having said this, other claims speak of Star Wars sets engaging sex-wise in the un-wise (decades ago). Of course this is Hollywood in two: Under blackmail rap and yet, awake to the blackmailers and their Globalist plans.

I know what Giles face does remind me of (c/o Lone Star): The epitome of the look of someone, who’s significantly Truther-intolerant. If he ever suffered ‘this’ fool/me, it would be very un-gladly.

I do like Giles being out there. Sometimes he gets my genuine amen-up and on this piece, pushes conclusions into a nutshell. Best we hear it. I maintain it's one of those ‘cloaked in mystery’ cop-outs that demands more attentiom.

If what/who God isn't a sizzling think-up, the awake are at least prodded by numerous discoveries that lean toward considering, what we all call, 'dark'.

There’s undoubtedly a case for progressive revelation. Is Giles view of evil one of them? Ancient? - it’s devils. Modern? - our shadow side.

Even Jesus following ‘traditionalists’ have to admit progress cometh because, what about the Reformation? The next two majors - these all-classic theology believers (the Reformed) - by and large dispute. One is Wesley and co, re(?)-establishing free-will (always a heresy), and getting assertive (yes, in practice but a stumbler for some in theory). The second is Pentecostal/Charismatic moves. (A mix on this, but the anti/anti it, are capital R's).

Question with theological standpoints? Where's the route-map, what's the outworking and what’s its root?

One key is a kind of theological Darwinism. Is there a long progressive record of the fittest thinking surviving, or suddenly up pops the new? In theo-terms, what did Augustine came out of, three hundred years of any and all dispensing - or what? Some kind of world in a unseen dual and freedom -or- was it all up to then, seen in some council or councils of God and closed? And more recently, say the last century or so, the theolgical questions and shifting?

On out-of-the-blue ideas? It could be argued ‘gay’ never 'good' up to recent but - joining Giles here - I’d state the basis for modern day framing wasn’t in view either. On the other hand ‘future times’ going... all-futurist-zionist etc? Aside from a short late-16th century Jesuit burst, got its all big-up out of virtually nowhere/never-been, from a teenager in an 1830 prayer meeting.

All I’m saying is thus:

Augustine is held in heart and mind by Reformers looking back to him and their reshaping of Christendom. They believe Paul got progressive on Jesus, and Augustine got this down and the rest is... our history. Which this concept stated as all-facto was and is, all-foreknown. Now... and every last falling leaf. And drip-drop and... coded in the Bible’s books, all our tomorrows which brings us, post modern-Israel, these ‘last days’.

These initially orally held, collated as letters etc ‘books’ didn’t show a progression going Augustine’s way. No, they kept on stubbornly reckoning in their often eccentric marvelling; we had our wills and this was decisive. So there’s gap years, 300 of them until Augustine coming into the Church from a dualistic culty belief system he specifically had chosen and now rejected. He took time to develop his views. All the while getting very anti-Pelagian, an earful from Bishop Ambrose with neoplatonics swishing around hip.

M' drums out (...again). Here’s what? Respect, oh ye and any, Calvinists reading. Nothing personal, please believe-on, as ya-like - and overcome what could become stumbling blocks.

My ting here is this:

This most publically prominent priest/columnist/panelist/professor, gets no Twitter-based and - now searching - no, non-comment based responses. Oh, found another twit, Southampton Mush - “It's a science fiction film mate”. No Mush, the Holly-rollers don't leave anything they can alone. More conditioning. It's part of their religion. The bad news in blu ray.

And a grandstand for-Christ lifting opp.

And where’s the church lamp/s? Why that?