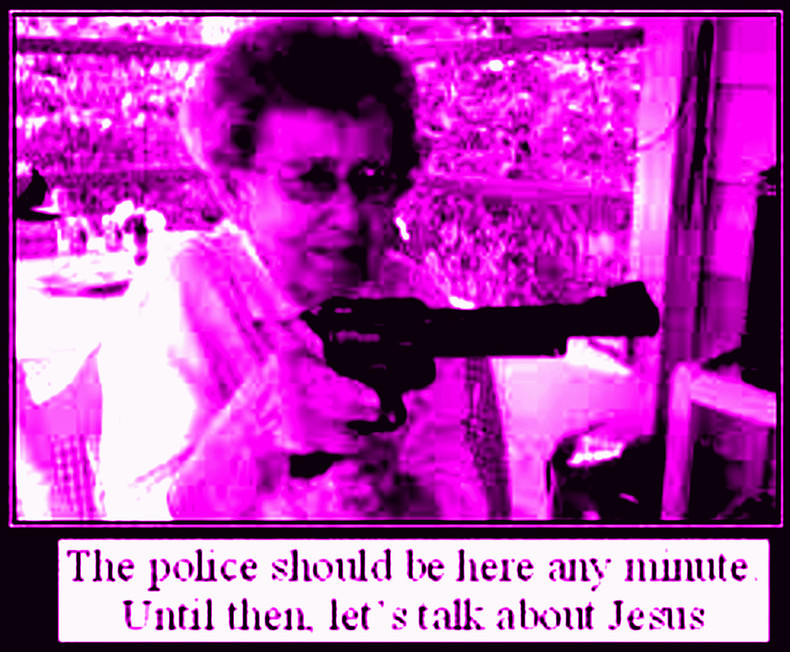 Be wise as serpents, gentle as...

Arguments to stand in self defence/or not, are left Biblically open. Swords or guns. The individual has choice. Laws of the land can over-ride this but owning/carrying an object to assist defence, is without any prescriptive word.

To disarm the US is not? Not in God’s name. For God, nations’ structures and which laws (or not), aren’t mandated. Nor is central and collectivist -vs- more local and libertarian. The will of God is time and place specific. There is no Jesus blueprint for Government. Or even, for governments. Otherwise why a debate? Or, what what was God doing when inspiring the writer of these books? Surely a word to settle some questions would have sufficed?

Some things are up for interpretation but when we're without this; wisdom, distinctive in offering more life and liberty than not, is God’s way - and enough. Truth, conscience - and as far as possible - engaging with 'others’.

Peace loving. Both sides, a chance to respond and recourse.

We must qulaify ‘God saith...’ when its up to us to dialogue towards our rightful participation is social action. (Albeit with convictions what we believe God is saying).

Someone in the crowd said to him, “Teacher, tell my brother to divide the inheritance with me.” Jesus replied, “Man, who appointed me a judge or an arbiter between you?” Then he said to them, “Watch out...”

Here, wider principles of abundance and greed stand. But...

The will of God, on guns, in America?

An informed choice made in a republic to change their bases to be, or so bit it, laws remain.

But where are the lies and for which cause? Where are they coming from? What could be considered disarming and robbing people of their capacity to more openly consider? Whose offering the glibbest platitudes with hypocritical lack of validity. I don’t want to directly identify these commentators but:

Comparing; ‘free health care to gun ownership’? When one, is a theory and system of finance; another - what as many as not, consider a historical foundation for practical safety. Can anyone explain to me the comparison? I say; it’s a form of discrimination, cultural, almost racial. An opinion? So, no. But what are the roots of this lazy claim?

It’s stereotyping, when there’s at least, 35 million known places/peoples, where there’s legal firearms, all 350 million of them. It’s an attempt to divide and have us believe, people who want the gun-laws to remain, don’t want more health for more people? No basis, no evidence. (Far from it, and as far as I understand in post and pre Obama-care comparisons, not something to be over confident about?).

Or this, try-to-be sarcastic and punchy; the definitive list of why Jesus wouldn’t want you to lay down your weapons. Left blank.

I feel like addressing this person, like I sometimes do with those who attack my understanding of, and faith in, Jesus. Instinctively, I want the chance to demonstrate reasons and power. For this to happen, I have help them discover stronger challenges, I might face? Help them, have more to say.

But wait we’ve seen their said-to-be blank opposition, now they fill in the obvious: Sorry I couldn’t think of a single thing that wasn’t totally and utterly insane./By all means believe in violence./Believe in killing one person to protect another./Believe in valuing your life more than another./Believe in your rights to have guns./Believe that violence can be a solution to violence./But don’t you dare say that Jesus is invested in any of the above./We already have enough people in the church presenting God as a nutcase… We don’t need more fuel on the fire.

Again, let’s be stupidly simple. The Biblical basis for gun ownership is zilch and the arguments are..?

Lies. Lies, lies, lies, lies... or at least the flimsy, shabby, childish use of... believe in. As though the TV gun-tooting image and oh-so-quick to be violent, is mainstream for gun-owners. Jesus ‘invested’ in? What’s, that, all about?

It’s despairing. Even a short but well written argument for God being behind banning firearms across - the rest of the States - could be written, but this..?

Now, here is what’s most disturbing:

Where these two examples out of many, picked out to misconstrue the landscape? As far I saw, coming Twitter-wise; this was the single comment from the most prominent of progressive evangelical, and most famous UK liberal Christian.

Let’s see if they write their own?

‘Progressive Evangelicals’ have become a church culture and home, over the last twenty years for those in the exodus, primarily out of the Charismatic Renewal. They wear their badge of more-oneness as a basis for inclusion, coupled with an ‘intellectual renewel’ that was felt was lacking, in their previous camp. They want to be in with wider evangelicalism and believe in its reformation.

I identify with much in the traditional scene and this emergent counterpart - their coming together is a significant call of God and, enemy strategy, otherwise.

When I ‘woke up’ the crash-points seemed as near as they do now. But I was wrong, they didn’t come so soon, hence ‘this’ is still now.

It was always clear that wide-spread violence in America would be a worldwide, stand or fall.

Conflating gun ownership with the issues presented by the lords of Columbia and their mockingbirds, but with little awareness or consideration of what’s behind the masking, is dangerous.

I pray we can hold this back.That more light will come.

I challenge Christians who play; ‘imagine Jesus’ and then visualise a gun. Or parrot the lies that less legal guns, inevitably equals more safety and life.

If those beloving Barack, his sincere tears and that he’s right. That those hot and bothered - here comes the the slur - “right-wingers” are all-emotion over substance. Certian ,that it's all about might over love, nout but bluster and fear?

Oh yeah? Play some of this from yesterday and thereby confirm, these counter-voices are much to do about nothing.