Crozier By The Day 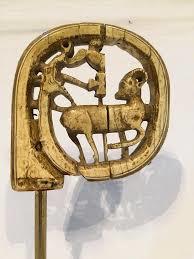 The Vatican gave them a crozier associated with a Merovingian (note) and first ‘monk to Pope’ Gregory. A sign that says, “get it together harder-line Evangelicals and split... and then some of you can come to papa etc”.

If - not likely - you read, and still think the Vat isn't so bad and into group-hugs? Try some history with Leo Zagami.

All in all though, Cath/Ang definitions are overrated/stated. The power invested in them is subjective. I see no point in those who love Jesus and people, falling out. (One misnomer of a sentence that). It’s a para-structure. Here’s the news: There is, no Anglican or Catholic, Orthodox etc - Church. There are buildings and management. Oh, and bank accounts. Bible speaks of local churches (communities that became... gatherings and/or community... churches) - that’s all folks. Over and beyond, thou should not idol up.

Theology divides Anglicans but this, more often misdirected, is described as forms and styles in church services.

Here’s my go at Anglican is mmm?

Other evangelicals, reformed or otherwise, don’t take the wider church structure they’re in so, some-how holy, that they have to eject. GAFCON - key word ‘confessing’ - do. They’re playing politics in a desperate protest. But then they hope the end is negh and this keeps their relevancy and sense of mission alive.

Their Kenya 2013 get-together managed 1,300 delegates from 38 nations. GAFCON is African... and a few they lead from other parts. They chose not to fight on for the Anglican Church with mainstream evangelicals, who mostly share their convictions but don’t stand with them, to make or break, over homosexuality. The Gaf-plan is to go but try and keep the buildings. They see the(ir) Great Commission, for no understandable benefit, is to hate homosexuality. The connection and implication to people being bashed and sometimes killed in Africa, is one seizable disconnect. Actually, it’s beyond this, its a backed up in the corner frenzy of denial against reason. Chris Hedges titled, ‘war is a force that gives us meaning’ it’s this, combined with facing their (tele)evangelism brick-wall.

The largest, and in parts, least not-declining lot are; mainstream evangelicals (charismatics and non-ones). Those who sit with them but... Are Progressive evangelicals who like to hang with - some - Liberals. Finally ‘in name of... but lets keep it QT’: Nominals. In smaller one church towns and villages, likely, a have-to-be mix.

Sen. Mgr. Welby spoke today of anti-Christian culture. It might be interesting to hear him break this down? My one judgy jibe is this. It’s not the culture out there that’s the problem, if I so dare lash out: We be smug.

Smug is the word that comes to mind looking at these Primates. Not Welby so much and top brass, but the rest. Whistling along they go. Sleeping tight and - fave Ravenhill quote - ‘hunting mice, while lions devour the land’.

And roaring with it... for those who have ears... those‘awake’.

Not here. It just “isn’t Anglican my dear boy”.