Truther (On This Maker)

(About to publish, but the vid/link below, has been re-edited, so have to go to '207 Aquaman and Joe Biden are creeps, My Call to Jordan Peterson' for the clip. Be clear, clip/s below, are not the bit commenting on. OK?).

"Big up to you Owen"

What, will write... go add this link. Another yahoo brilliant comment. Go read the many-cracking rest. ALL about Response and -- a thank-God and timely provoke a me-on over-used -- 'essential irritant'.

"Oh might we have a post-Hollywood-upstart doing his thang. What, thinks-things, and on that, retched internet. Go darn's thinks out loud, plus, bit of a clever dick.

Crap-ville-culture-idol sick-pen, re-appropriates for self/them. That let's G O D go sick splutter, mr. xyz is a one-er, like, 'one of them and a -- gotcha -- Woke One'. Got we now, W. comedians. Any ol' shit.

The famous hidden-truther is a liar. So why claim the name?

A-Wake = change of mind. Not somehow you pricks and prickesses got to own, some, birthright. More the saddos but granted, better keep filthy lucre flowing and shut-mouth-about-ever. Most sense and the "no comment"/don't lie, lot. Else:

Neither hot nor cold.

(This at best, being gracious).

Because, he don't.... sound, much like some-Prat Ass -come - take the pisser and why, and will, Not, STOP, asking. What we all now, despera-mondo-oughter, sooner, shoulder-er, must, and you're going to have to HERE ... for his; love, family and -- competing as nos. 1 -- God-sake. Needomondo.

Like typing way here, with me dogma, as in, 'Dogme 95 Manifesto'. Have the lines and things ya do's, and ya, don't/s. As jazz is like -- and local clip. Enforcing disciplines. Rules to run. Or, in this case, for Truthscoop.

Am back on, the one to watch right now, reckon break d'dogma and do an on-a vid.

On this maker. This/should a comment. A transcript, would've sufficed. Straight forward Truthscoop.

Say, we need to talk about O wen? And ain't it right and so many. Jesse Spots provides engaging accompaniment.

Off chest; Have disagreements with Owen, and on this, gaahhh; "nah-right-about-now". Does better and sound, he goes for, scheduled investigations.

Yet, and 'cause, hope/pray/trust... believe-will, and all because, he looks set-heading them-ways, be one we should man or wom. who must assist us to face the human.

Kicking dogmas out the... punch up a selection. THEN, one more on the Jesus tip and back to Dog. Next post, therein.

Since Dogma's off this post. Image below for Owen, fam 'n all.

Respect his pace, since and 'ain't me'. Give man a chance and a fair shake to, what are, said to be challenges.

AM I A TRUTHER?

Word to Eric, thanks for the push and wants always to open dialogue. Bet you and O. will be all buddy and should. What you some threat? Have some reason to be edgy with the shit thrown at ya, but... Truther say-me and do-er or, don't mean much, err... else. Be people -- be honest, you'd slag-off till the cows came, are at least -- considering their situation -- Do-Ers.

Co-belligerents, yeah, let's all be so-what not saying dat so bad you but...

Sins of commission -and- omission.

Glad you sparked up nevertheless. Right to qualm.

If Owen Benjamin communicates public/live with some on the internet, gonna be beyond, fireworks will be set off. On you -- Eric Dubay -- seeming to epitomise dis? Well y'know, I'm with Owen all the way and am as/more interested in else debates. Yes, Jay Dyer -- another who can't but share oodles-me (who can't?), yet dispute some of the God-talk -- would be wholesome and productive. Could imagine many....

Should give Nathan (lift the veil) a shot and Spots (Jesse) a-go. Else...? Not matters but... may, be, oh baby, could we shake some action, if Owen B keeps flaming the groovies?

Love is a verb, Doll by Doll sang on Chances, Anarcho-syndicalism I did own and would proclaim my label -- goin' anrcho-vangelise zing -- for at least a decade or so.

Truther is the same. Decade-ish ago, initially, considered knowing something made you a truther. Wrong. Does ish but first question is what y'doing. Owen's credentials fly way-way-WAY past the mark. As he explains: They won't have him on. Back to Twoof history. The one most forgotten bridge end was Infowars social network platform, Planet what-not, getting over-moderated -- was around Bilder-Watford time. Bridge-ending. Where we went wrong. Wherein time-wise, honoured to say, prayed with Alex, and for any since heard say qualms gets my utmost gets my RESPECT. With reservations x 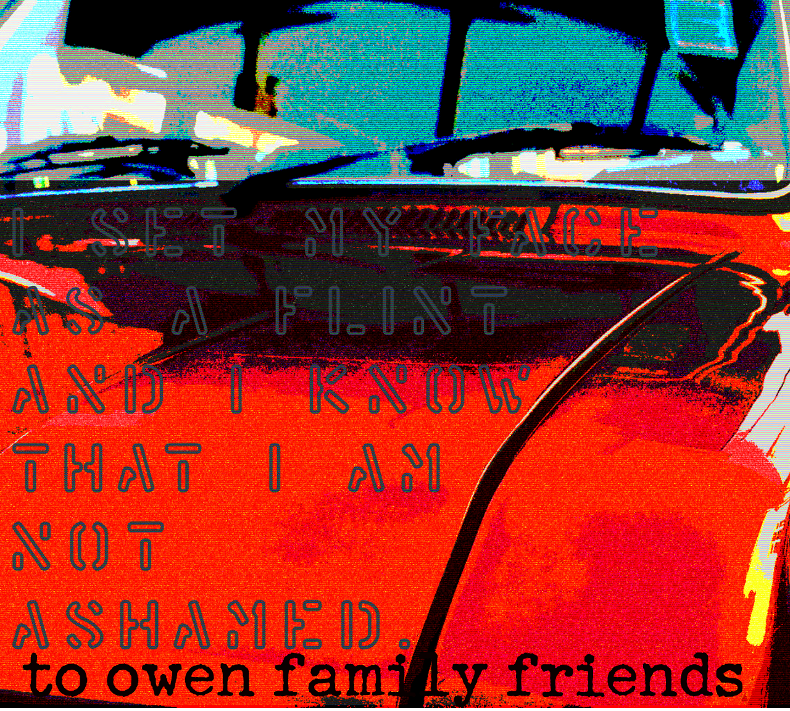