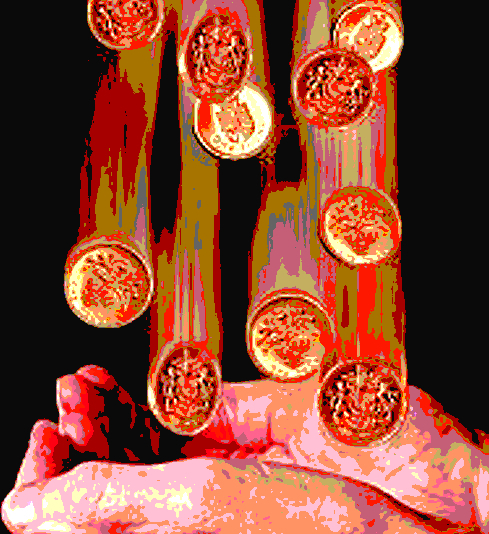 I haven’t made the bright moves on the mon-front, so am left relying on God. It’s the upside of the down. There’s some fierce contenders for most-abused verse in the Bible but, all things working together for good... probably, the best/worst? Yet... (you know what I could write..?).

I post to ponder. To pray along with. That book staring at me, always try to keep propped up and open. No tricks there. I don’t even see or read the words of the bible with, that possibility. Not book/s like another. Power and all looking towards God.

Put on to it ones though. Legions of them, or woolly ideas meant-well. I’ve been shaped by some but thank God, I’ve tried to work them out. Get them off or at least held lightly. There’s degrees of self-delusion, that’s different. Overall, I’ve been on a blessed road, with people and places that gave me ample theoretical light. For me - not recommended - heaps of long-term failure helped. At least now.

Strictly speaking, 15% of New Testament verses are about money and related. I was once told by someone reliable, that you could could double that. In consideration, I agree.

The ‘love’ of... all evil the most famous one and ‘prosperity preachers’ the most vilified of Christians.

A comment on both. When the - “supposed/of course” - devil, took Jesus to the highest point and offered all worldly wealth and more, for a bow. Jesus declined, replying, worship God and God alone. Devil-claimed, he’d been given all this power and therefore - could give. But the devil is named as the, trickster, and liar? Why should said ownership/and given, be true?

So who controls money and what is it for?

The spending obscenity by the teachers of this new get-prospering theology, is enough to put a full-stop. Deep asleep and cuddly to the system - more no-no’s.

Yet, on that front, we can throw in most evangelicals. Progressives, who lead the anti- the-faith/prosperity-mob, hide behind, ‘bias to the poor’, convincing themselves Jesus is into Marx. More no-no’s. The ‘bias’ is us - doing.

The 'hiding' is in blaming institutional and social structures. This, they say, is where the devil is all embedded. Part accurate but follows mainstream narratives and unaware, or unwilling to face the conspiracies.Right / Left but not, an arising alternative to Empire.

It’s not, overly simplistic as it seems, to make any argument against ‘anti-capitalism’ that, this isn’t... therefore, be up for moderate but more collectively organised works but trust the Central Committee do be good ones..? On what historical, let alone Biblical basis?

Out banging all the liberal drums minus some caveats, others march on the opposite - slight varient of caveats.

But Jesus isn’t an anarchist or anything else we can define using our paradigms. A people and justice lover: That’s all we get. Libertarian, seems, just about the least problematic for freedom for most, with less people/money/authorities over us all. But even that, is subservient to anyone awake, rather than not.

No one has a political view worth considering - let’s keep this Christian-wise - unless the prophets are heard about New Babylon and coming.

Back to ‘prosperity’ gospelizers. They say the devils are in some shrieking in the pews. And personally anything that goes wrong. They make a madness of God but...

,,,God does-want-prosperity. Personal, national and global. And the Bible - with prayer and love-action - is; the power, conduit, weapon, faith-bringing, miracle working, seed-vault.

But what a muddle? What tricks?

And... outside the church, the devil’s Central Banks Are Out Of Tricks - Charles Hugh-Smith, reposted on Zero Hedge:

No one knows precisely how and when the global unraveling will impact their corner of the planet, but we do know one thing with absolute certainty: central banks are out of tricks.

Like all good conjurers, the major central banks will claim that their magical powers to inflate asset valuations and inspire the animal spirits of risk, borrowing and spending are unimpaired, but this time the audience knows the truth: their magic is threadbare and their trick-bag is empty.

Obfuscation and doublespeak are primary components of central bank magic. The magic is largely semantic: if the Federal Reserve claims it can restore the economy and the stock market with reverse repos and other financial legerdemain, the corporate media is always ready to repeat this dubious claim until it is accepted as self-evident.

The central bank magic is fundamentally a mind-trick of managing expectations. If the Fed (or other central bank) announces a quantitative easing or market-goosing program, punters buy assets anticipating the success of the bank's program, effectively creating the very push higher the bank intended.

This rise draws in other traders, and the program is declared a success as the market generates a self-reinforcing logic: the market's response is evidence the central bank's program is a success, which then inspires more risk-on buying and further market gains.

Once a central bank program fails to generate a self-reinforcing rally, the mind-trick's power is broken. Once expectations of a sustained rally are crushed by the failure of the rally to achieve virtuous-cycle lift-off, the magic no longer works: once traders take a wait and see stance rather than rush to place panic-buy orders, the initial rally soon fizzles, and the expectations of effortless gain are replaced by gnawing fear of more losses.