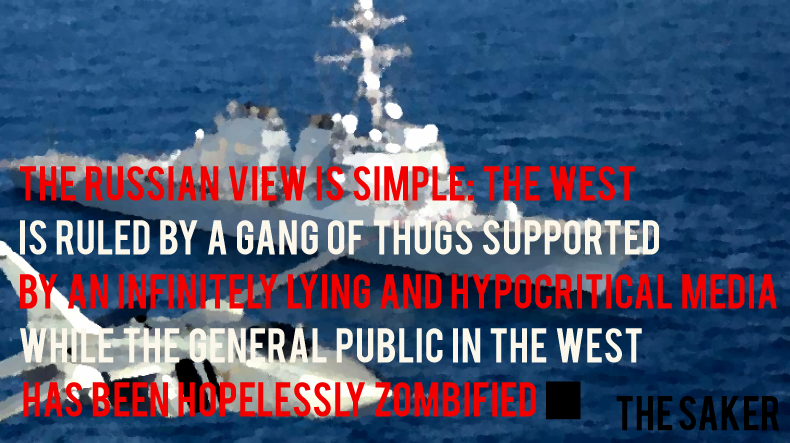 Paul Craig Roberts scanning the commentators, including The Saker and here, concludes the military drive can only mean and lead... to a cull and catastrophe.

Fading by the hour is turn-back and get away with more symbolic damage, over an unable to stop escalation. Regardless, we're into never-trod dimensions. War cold or hot, new ways have been set in a precedent, won't be easy to return from.

All assumes War-not full on. The return from this isn't even all about where the bombs crash down but the collapse... no more this kind of internet, for a start. Dominoes and food shortages.

Results of March 08 experiments are in -- and little whimper from the crowds. To the extent this matters, the media-induced comatose, is breaking all records. Information anesthetists and the turning up the gas. Fazed by the audacity. People 'want to believe' their social guardians -- at least, somewhat. Feels like hope and too unthinkable otherwise.

Take Nikki Haley's latest 'monster' and 'pictures of little babies' UN talk. The Saker describes the likes of Haley as a 'gang of thugs'. Although un-look-like, all sheen and suntan. Colossal method acting and convincing conviction. Knowing, talking fiction. But this ain't no movie. Is this what they believe? They're on a set, the script and a job. Attitude could be "someone's got to star. May as well be..."

Reckon they've a think rock-solid backstory. Supposed noble lie. A viable motivator. Else threats, or a room in the bunker.. what else explains?

(What this. Received an email/as I type, from someone being oh-so let's get on. All about hikes and photos. Understand 'life goes on' and all that -- but this one a knowing-sleeper. Thereby what should be a healthy hobby and self-expression is no better than wiles of a crack-head. Don't get me wrong and on a self-better and right trip. Can go off and play. My side-note here is a grieving that men -- or women -- who, could and can see, look away. Grieving at us -- the pitiful.)

The gloves of deception are off and headline news. Less pretence. Increase in showing how to ignore the critics. Blow up the bull so Big and Mad -- even in the midst of most obvious holes. The need to tell-us, that we can forget all and any expressions of common sense.

Events and history always been chock-full with fake but in our day and the 'Free West' -- gone legal. In the US enacted on the books in 2012. Inaugurated with Sandy Hook.

Pinocchio nose extends and gets nihilistic laughs. With the reprehensible "know-better" and dismissal over questions seeming too outrageous to consider.

The combo of digital everyone and whereabouts, a barometer. Not seeing when should, speaks as loud, as what gets thrown up to see. While on the cusp of all that gets put-out on the net, is Govt. etc. in line.

The next false-flag -- non-international incident -- will be all but revealed. In fact, all but... in a production so preposterous. Because it's not about hiding but mass acceptance.

'Leaders' lie to cause policy and power-shifting have a developing and coming cry, "get over it".

We're moving into new days and exposures. Up the temperature. See how the frogs react. The poisonings and the latest chemical attack are somehow preludes. Yes, dangers and a culling -- but the way ahead is we can 'be seen but not heard'.

We cannot proper bow to the idol and what's behind, if it's obscured by alternatives and the hope of truth and justice. No, we need telling, what to believe. Take it like a happy slave and celebrate the masters in their palaces.

Guess all am saying is these lies and their ability to gain ignorance or acceptance are going the way of 2 + 2 = and "let's heat it?"