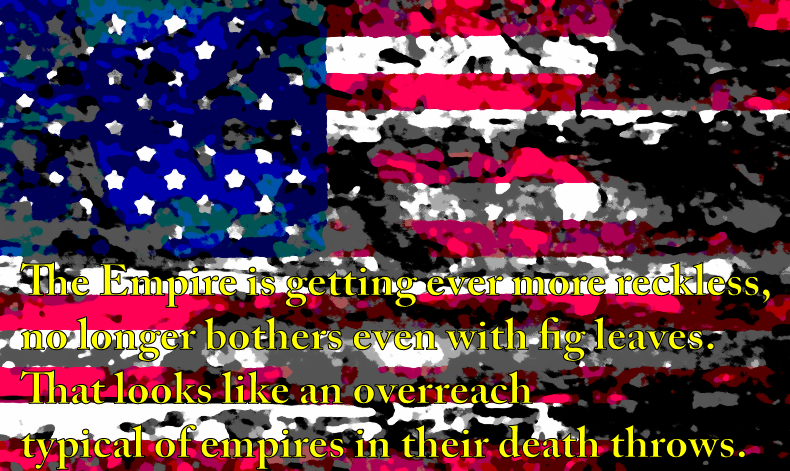 The internet and enter-the-net? Caught and cooking is the movement online. Escaping can be about engagement and participation.

For me, a Jesus' table-overturning instruction and command, through typing and graphics. Go in the temple shouting, while pushing over in a symbolic and heartfelt frenzy.

Not about dreamy dozy, am read-much, self-deception. Even those reckoning are and saying something is fraught with discouragement. Who reads = What happens?

For me, more signs to somewhere 'out there' and aid doing something more, i.e. pray. An exercise in the face of the technological-led onslaught from hell. Mental and psychological essentials not to suck the demons what-not.

About doing, what should... considering... the situation.

'A well regulated Militia' is the second ammendement. 'Being necessary to the security of a free state'. People's protection from the military and medical industrial. A US and guns context but in the West, the wider and active frontier is online.

Freedoms around public calls for security and accountability are going, going... and gonna be soon, g-g-g-gone.

On recent projections, this website will get there. On a small-ish list. Not delusions of grandeur but awareness of the terrain. Video (aka YouTube) has become the dominant form of communication. Hence, this where the censor's making its initial primary cuts.

Next will be a required personal licence. Herding all into near-on useless political writing etc.

Or, no internet for you, oh blacklisted one. One step before the courts.

Is there an unless/if? Have to wonder.

Under a cover of mashed up and mashing up widespread thinking flows the rot. Radical apathy to smug stupidity from Mr/Ms Thinks Knows-Something, a jumbo green light.

Of course, it's the 'love your servitude' manifesto. Perceived to be circular justification by cattle and sheep, beckoning slaughter. Our purpose is to make a few thousand people's future vision. Fodder, feeding tomorrow's world. Enough brevity and suffering are here, go the central sickos; "so take the jabs, pills and switch on". Better for the whole. Better we live, few on, and "you" enable us to get there.

Click the mouse and "welcome to the new world order". The internet followed TV as the gateway to lock us down and into darkness. Corruption unrestrained and centralised worldwide control.

The swinging goes: Let Know/Shut Up. A no intention to resolve dialectic. The temperature gauge and comprehensive monitoring of sedation and sleep. The rituals and sacrifices for human power mongers duped by enemies of God entities.

Calling out the evidence for false-flags and/or hoaxes are top of the shut-down charts. Began the YouTube's censoring wave about three years ago. All the other kerfuffle is a kind of bait-and-switch.

Flags too false remains the threat. All the while increasing the volume a necessary development.

Criminals so-caught out to freak the population? The 99.9% who don't realise/aren't prepared to accept what's doing/don't care/are content to lie along and complicit.

The internet, sanitised from Truthscooping.

Articles and videos that cause a conversation. Find words. Comments... disagreements upfront and open. Not an over-moderated con there's openness. This post is my comment on my last one. Words and thoughts missed. Can remember on the last post trying to find and use 'Pax Americana'. Noted a comment on:

Venezuela, the Deep State, and Subversion of the Trump Presidency.

Is that the term you were looking for?

Well yes, I was. And the different opinions expressed are the fuel and so welcome. Interesting, some bemoan an article included by the editor, considered doesn't warrant publishing. WHAT... the final best-thing about The Unz is the willingness for a degree of diversity.

Comments are the best thing about the internet. The one advantage over books alone. Unless of course we could read and discuss. Disagreed-with by others and again, oh Hallelujah for this.

Our diversity in a discussion is a strength. The reason we're in such an intellectual come academic public mess. Narrowed agendas and too many, never-discuss, topics.

Frightened little pups pretending to think and share honest and open. Rather, immaturity evidenced by avoidance and fearful prejudice.

Below is one of the comments. Would read them all. Check the links. Of course, those who'd benefit a shift in their thinking, stay well away from the hot kitchen. Can't take it. Worst ones for me are the Jesus talking think tuned-in types.

The 'dare not' discuss-ers. Everywhere I turn (if I did/do).

'Pax' -- the 'kiss of peace' which is what the masters of war are after.

Where is there much any prophetic Jesus-like talk?

What... its come down to a less than best shabby one like me?

To be discerning, must 'take heed therefore how ye hear'.

Trump just congratulated self-proclaimed US puppet Guaido in Venezuela. So, he can no longer pretend to be an innocent bystander: he showed himself to be a willing participant in the criminal activities of the swamp.

Three notes on the bright side. One, the Empire is getting ever more reckless, no longer bothers even with fig leaves. That looks like an overreach typical of empires in their death throws. Two, Maduro, despite his obvious failings, appears to be prepared to defend his country against banditry. So, maybe he is not just a piece of shit, like Yanuk in Ukraine. We’ll see soon enough. Three, Erdogan, who the same gangsters tried to overthrow not too long ago, remembers that and voiced his support of Maduro in no uncertain terms, despite Turkey being a NATO member.

Enough from me/here. But something.