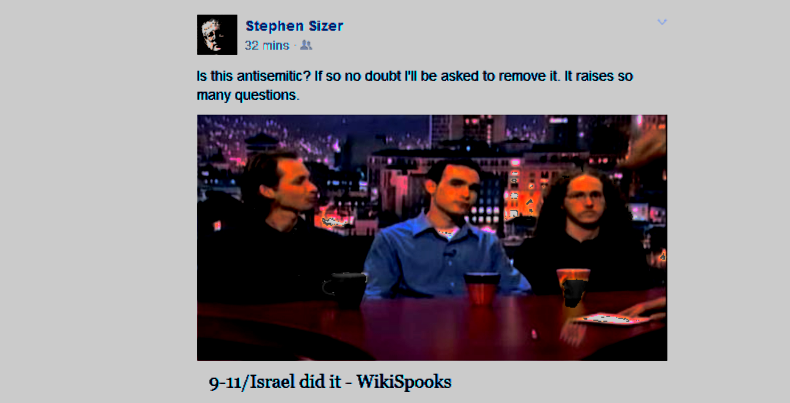 Today, the most controversial trio of words are in view. Or, should be. The growing conclusion from the best and brightest: Israel did it. A stand-alone wee claim, unravelling politics. The debate is over more or less and 'did it'. Intitaiters from the genesis, through to collaborating baggagemen?

Mossad. Proud, of their involvement. Operatives going on Israeli TV and explaining were, there to 'document the event'. High-five and lighters. A celebration jig. Bold with the breadcrumbs back to Tel Aviv.

Church history records 'here I stand' moments. January 2015, a vicar tweeted: '9/11: Israel did it Is this anti-Semitic? If so no doubt I’ll be asked to remove it. It raises so many questions.' That got a threatened sacking unless no more social media. And apologies that... truth hurts. So stop it. Man banned from public communication. Raising questions, NOT tolerated.

Again and today, put 9/11 in a search-engine and 'news'. Squat-diddly. Last year The Star did a "wouldn't you know there are doubters" piece. Not this time.

Here, the what-not honest, bow coerced, or willing and wanting. The Unz have two or three articles. Let's go 9/11 Was an Israeli Job. See what I mean? It's out. The only evidential and reasonable conclusions, it was M O S S A D. Could be top to bottom -- doers. With assets elsewhere. The inside bit but as Laurent Guyénot writes:

Another question is: why do those who keep repeating as a mantra “9/11 was an inside job” ignore totally the compelling evidence pointing to Israel? In other words, to what extent do they constitute a “controlled opposition” intended to cover up for Israel? Asking this type of question does not mean suspecting anyone who defends an erroneous or incomplete theory of being a hypocrite. Most people defending one theory or the other do so sincerely, based on the information to which they have access.

Planes or none, bombs and/or weapons -- this way or that, numbers in the building or not? Different camps bickering with frustration.

Yet, who can make a serious counter -- Israel did it -- claim? No one. Not poss. Take Christopher Bollyn. An explanation, metadata rich, undisputed correlation and connections. The who did what and how..?

Leaving technical disputes aside, the fingerprints and witness statements, are on record. Israel didn't only 'do it' they near-on telegraphed this for all who look... to see.

Wagging which tail and who the-dog are secondary. Israel the running ones and not run-by make sense on this. Be it a collaboration, joint cooked-up, or the other participators cucked along. Blackmailed through to dribbling, suck when asked, cult members.

The poor are the new rich? Poor and blessed -- so saith Jesus.

One application would be the need to be poor in the sight of the media's gaze and expectation. Be that poor pathetic conspiracy theorist. Despised by the pretty people on the box. The clever dicks, all in a silence and complicity.

Say again: We cannot be allowed to read or watch ANYBODY in the hip, jazz, trad. liberal, conservative and leftie lot -- DARE, come out. No celeb. No 'name' is able to say anything but 'Osama did it'.

In fact to say 'Is. did it' is without question the single detonating unacceptable. A claim for consideration leading to tick-box every reckoned, troubled, cause. A literal asking for persecution, ridicule, and mockery.

This is why it takes, a kind of voluntary social impoverishment. To face the public cost. Employment issues and related keeps many in the sewer of lies. As for those with no clear need/cost to 'come out'?

Our souls find liberty or we self-punish if we dare go along with the scam.

Try going around as an adult talking about Father Christmas and Easter Bunnies. Or... coming up next year, the fantastic, giving it the "we went to the moon" line.

How about the current 'Westminster Bridge' enquiry? Look at what we have with footage, witness statements and establishment narrative?

We have fragile, street theatre.

Risks going-poor. In the eyes of... sheeping along, lying or ignorant multitudes. Rule of thumb; The educated and standing that follows? The rich..? The worst. The ones unable to give up and face repentance.

We are so-so-so stupid. Don't we get it?

Do we get the consequences?

9/ll is a gateway drug. The slip and slope. The lights-out and fog about geopolitics. Can we take any bold deniers -- and they ALL have their badges on -- as being serious about anything else?

No. No... ok, do and can listen/read the 'Osama did it' sucker the crowds along. But NO... Not a serious person.

Cannot be. Controlled and in and about the truth, become our opposition. To maintain, let alone try promoting the crap about 9/11 is stamping on humanity.

The least harm is pleading radical disinterest. Maintain, IF and this event, a jumbo false-flag? "SO WHAT?"

Pretenders with those intellectual eyes firm shut? All we are is a clown. A fool. Jester with a whistle jumping about for the lords of this age. Slaving up to the sons of gentlemen of the City of London.

A person in a prison cell with a big dirty bully pointing to the floor to get on our knees and open our mouth.

An idiot? Well yes, but this isn't typical and consistent with other areas our lives? It's our inconsistency. Our filthy sell-out and push it doesn't matter.

What will come of people of the lie? Scott Peck describes evil as 'militant ignorance'. The need to put our looks over lies. "It's only 9/11..." and so goes all the other ones. The need to acquiesce.

The principle and Johnny Carson interview where he posits a contrast; sleeping with someone for a million dollars, to sleep with someone for twenty bucks? Why the outrage after toying with the first question?

"We've agreed what you are, we're now negotiating the price".

Same here: "9/11 Osama". Agreed you're deceptive believing. Now there's little, come no motive, to face the other 7/7's and all the rest of the debacles.

Can we imagine the collective cost of living in homes where papers read and TV blaring? Demanding we -- back to prison -- bend over. "What again?" Yup. Took it once, from thereon, our body is for abuse. Whenever there's that knock on the cell door. You do/what you did/again and again and...

Buggered by the BBC. Etc.

There can be no hope for our communities if we do this 9/ll lie stuff. We repent or we're traitors and whores.