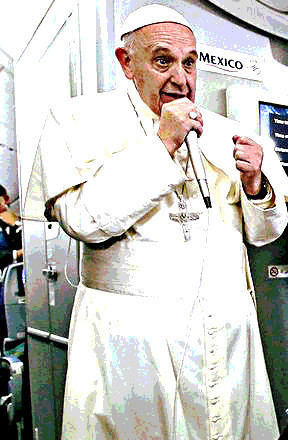 Long, long ago. I saw a Thrasher Mag back page and a drawing of two jars, each with meat in. Lid-off and flies, lid-on – not. The headline said something like; You want to know what anarchy is? Later, many years on, I stood defined ‘anarcho-syndicalist’ and although the illustration had some merit in describing the big A - it's wrong. Partly, in anarchists fighting against the oppressive tide, they conversely believe will lead to worldwide anarchy - but in being all and more about, post-rot reconstruction. And more than ever these days, doing a kind of pre-contemplative anarchy, that engages comfortably within a broader activist spectrum. Here-now anarchy, modelled.

But it reminds me of all the Christian possessives, especially all-in the UK.

I cite Christians because this site is a ‘Christian-me-based news and views outpost’. My other one is a morning prayer thing.

Here's my call (to the 'many' readers, who aren't…): Can we all stop saying “let 'them' in” - if not somewhere qualify/quantify-ing what the particular view, underpinning this, is?

'Bridges not walls' talk, doesn't seem to be accompanied with the likely and inevitable belief or admittance, there shouldn't really be anything to bridge or block?

Or, is the suggestion; only asylum seekers (remember them?), or refugees are 'let in'. Should require certain passports, but the threshold is lowering, along with extent of potential war-zones and over-spills. And what happens to those who claim loss of documents, genuinely or otherwise?

I think there should be some easily tagged defined viewpoints. Abc or d-like. Then I’d get what’s really meant.

The Jesus bias to the poor could be (note the ?), attributed to governmental and state-wise.

Personally I plot God’s line on this, for us to be in a ‘middle’. Face on the people genuinely fleeing and compassion -but- the consequences in overturning the lifeboat?

The bit I think swings for a pause, and therefore wall for now and the most part and not bridge, is: Who’s causing the storms and why?

Only knowing the hidden-ish planners destruction of, US, UK and Euro: All and any - identity, culture, history, nation and ultimately individuality - keeps the ‘bias’ in check.

The Church has a bias, no question. If anyone asks us, for anything, we should give it, said Jesus. Us. He didn’t speak about ‘them’ giving.

Be a ‘socialist for Jesus’ but if this is inadvertently, the destruction of what the being ‘socialist’ is about? Or let’s say, socialist to that degree?

I appreciate the ‘we’ll give all’ to the poor is being translated as - we... being, ‘nation’ or middle-class, or whatever better-off. But is this ‘ours’ - to give?

Could the very progressives, who’re in utter reaction to their Jesus-counterparts in their exceptional-America-in and expansionism, doing the very same thing? Only to con-tract, and have us all-poor, because this somehow is better than too-few, too-economically rich?

I don’t doubt Christians mean well in paying the cost, the taxes, have less social care for the sake of... But supposing it doesn’t work out that way? Still of God?

To repeat: standing in the difficult middle between, compassion (‘gentle as doves’) - and walls, locks and boundaries (‘wise as serpants’), isn’t comfortable. If Christians-all-who-say, “refugees welcome”, committed to visiting the camps, or just over-the bridges - that be a start.

The reason we have a nationalism/activism, that is neither prepared to see though and past much of Islam, to the wind-up, false-flaggers - is because the church sleeps along with them.

The Church is a bridge. Maybe not to call their country to be one but between those who feel besieged and the ones they feel are besieging.