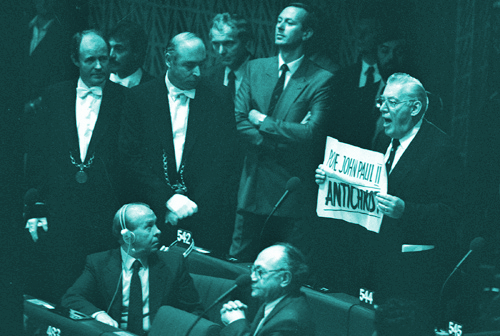 Mark trust me on this one. in 1231 the pope issued a papal bull. Those are written on the skin of dead children by the way.

It owns the City of London and this treaty can only be abridged with consent of the vatican. So Britain is as much a slave to Rome as America is. DC, is the same a state within a state.

Except Britain 2nd on the totem pole as they are appointed as rulers of America. Rothschild prints the money for America and it the vatican banker.

The party line across the web os course is the vatican is just a harmless outdated religious outfit with a few pedophile priests. No not hardly. It is the wealthiest corporation on planet earth.

The jesuits are it’s kill team. They run the CIA and M16.

I want you to ask yourself a question, would somehow the richest corporation on planet earth not have any khazars inside the inner workings? Is it even rational to imagine such a scenario?

dun know Mick. got me there.

All I wanna do, know something from God and pray more. Somehow know enough to benefit the counter. Some of this post is stretching it. Or, if you-me/would have choicer words. Let’s accuse accurately, or speculate openly? I’m open to the depths of the Vat. You could be right, that’s where ‘they’ sit.

Augustinians, Prods, the Protestant view, has always seen the Pope/s – The Antichrist. Perhaps my prejudice why pause, re how deep ‘they’ go. Plus, the anti-Christ stuff is Biblically-misunderstood. Nero prob. and like, and yes, a forerunner – but all the Christians banging on, are inviting those – thinking they’re able – to have a go. Want an anti-Christ? Here you are.

The Reformers were something (astounding on God) else – but not the Apostles. The anti-Jesuit-Christians, thought/think, this the most-enemy.

Yet, Reformers have their Popes, ever looking only-back theology, tending to disregard everything since, that has any rightfully progressive insight.

About 100 or so years ago, started some encapsulating best-traditions opposition. Reformers dug-in and stood against the “wicked papacy” Irish Micks a lot of them. Paisley the star. Others same time – my word but true – ‘invented’ the overwhelming here, there and Texas-where – ‘end-time teaching’. Whom believing this, all must admit, wasn’t previously considered thus.

My interest, is in what the ill, (call them that) ‘want’ us to know? Masses in a lost frenzy. 20% bit more inclined to get actively concerned. And weeny, weeny number – know. They need or let’s say, perversely value, this dynamic. Watching the pie-charts. This provides a ‘religious for them’ experience. A chemistry. They push and push. And with this vulnerable to go, too far. They’re into the process, not overly wanting to hurry the extensive cull. ‘IF’ / I say/pray otherwise not.

The big Q is this. Are they aware there is free-will or not? Awake or not? The ones non-human behind them know. What’s conveyed to them/they believe and act on? Dunno. Are they fooled in fate or real to randomness. Let alone do they know – Jesus has and will defeat them.

Thanks for asking. As for ‘would somehow the richest corporation on planet earth not have any khazars inside the inner workings?’ Loads probably but who got the ones-over, in the final elite shakedown?

1231? They’re lost in pumping numerology. Reminds me of that. As for holding some paperwork? Again – I defer.

‘They’ who got the most infiltrated in most places with money, guns, corruption and blackmail or threats-over. They the ill. Those who we should have no respect, sympathy or – for he unseen at least – potentially redeemable. Bugs. Corrupt. A disease to rid.

I think the human agents are being deceived, deceived. Think they’re the head. And yet them the tail. And ‘he will crush your head, and you will strike his heel’.