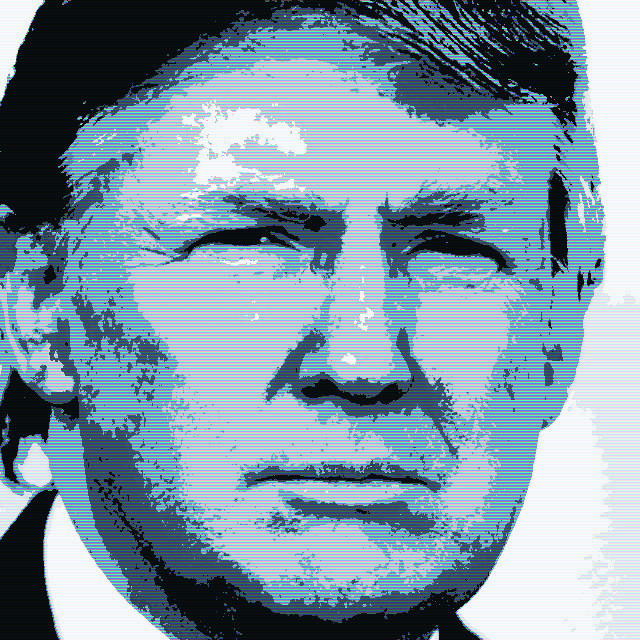 Change-a-plan: A quick splash on this:

...this racist, misogynist hate-monger who supports torture, ridicules the disabled and wants to ban all Muslims from America.

Apart from unlike-Don no-crowds, I better do other, than write on what others think about T. Here for a few-ish mins and that'll do.

'Crimes' reposted this to the top yesterday, says enough/me on it.

Statement or two/responses, save trying too much of my ill-fitting 'joined-up writing'. KISS. Keep it... short, stupid.

The conviction on Cole's version is frothy and flawed. If Donald was the claim-is, all-and-all, think he might do a bit more of a better cover-up? I know why - I think - Cole writes this, but regardless of the position: Where's the substance, evidence ..? Could be..? But there's none of that with Donald. He 'is'. This.

Who else might this kind of ascertion be true about?

On that, I think he probably would, vet-out all but squeaky-could Muslims bit like torture, which he claims do 'legally' not back-handed. If anything... this is the possibly dishonest Trump. And let me declare to unread but not unseen. He would stand and fall on this hold-out to integrity/or not. His now-changed (nb that. They don't do 'that'– do they?), stupid, no-votes-gaining pro-torture is now, 'if legal…' is still not-on. He's either stupid or playing the tough or... sick and stoopid.

The mad and saddest thing about Trump-attacking is it re-affirms the hidden history and political contemporaries ways. Ignores, not only the NDAA but all the volumes of torturing in US name. Not DT is one more… no, he the torturer. Vote for all the others first? Who all exceed Trump on war and torture? Is this what's being prescribed, encouraged… in Jesus name.

Fast and Furious, Benghazi? Ice-berg tips, but here, the overriding missing lens: See no mountain, see Trump as the big hill to wail and bemoan.

And… try troubling, 'if you're religious'. The last card in the hand.

All… 'Trump has sinned and fallen…'

Tell you what it is? He doesn't pretend to be religious (that much), socialist/egalitarian, he looks money (unsurprisingly) and here's the TKO – sounds 'believable'.

Statement. There is NO way, at-all, that DT could be worse than HC except… and this is why HC winning might be best… to bring about a unifying wake-up. Praying this happens quick enough before HC shows the world who HC really is and does.

Donald has a 'bought into bad' C.V. No logic or evidence suggests his run, is not because he is… like this. King for a… (Has anyone been noticing the Rupert Pupkin about him?).

But whatever happened to Jesus’s second great commandment to love your neighbour as yourself?

I like Cole. Not expecting tis mutual. He's remained an open believer and with one or two others (maybe low dozens), credible among the thousands thinkers 'following'. He's “one of them” in their mind but refuses to privatise "me and Jesus". Might arguably be the most respected, not-so-liberal-theo-wise, Christian in the UK.

He's Press see. And this, the bad-gelistic wing of the Illuminanti (jest-not). These behind-moguls' manipulators, feel those seen 'Right' (although a problem), are not the bigger threat. Liberal and Left-ish lot. These are the prize that must be stolen away from the alarm bells. This is who God is strategically calling to awake. Actually God will take anyone mainstream. But – easy/yes,me to say – requires, losing job and to some degree, maybe life here/now.

The call isn't to abandon some social theory about the world-best. It's about giving up lying. To yourself and therefore…

And Cole quotes Jim (Wallis). The word that's missing and thoughts thereon on this boo-boo is; 'unlike...'.

Whether Donald Trump is a Christian or not is something between Trump and God, but his vision for America’s future and his policies are indeed contrary to the gospel. Donald Trump is an anti-Christian candidate.

He goes on, The truth is that we have seen this before. And it’s time to tell the truth.

I almost think I should stop reading the rest of the article. Save the disappointment. I am. Enough. I'm learning that sometimes it's best, not to know.

Donald Trump is Donald Trump. Few public figures are rich and confident enough to pull off his trek.

I'm not entertained by him. I feel sad. He's a most-likely, forced but gonna be 'nuther war-monger. Who'll go so far but IF, (unlikely as) he D'Prez? Take the compromise: Or miraculously, give his life, for us, his neighbour. He doesn't have to now so much and is therefore shock value.

I'll give y'one. Especially for Jim.