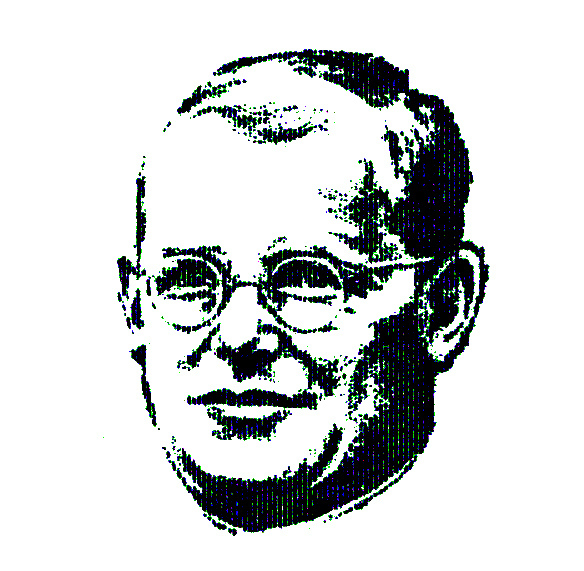 'Bonhoeffer’s wisdom is very much still needed today.' So saith the 'intro by Brad'. That we do.

I came to this c/o @postbarthian – the writer Wyatt Houtz who I thought, was a much older man with heavy specs when I first saw his profile… initially failing to recognise, was a picture of Karl the Bath himself.

And, 'BioLogos, invites the church and the world to see the harmony between science and biblical faith as we present an evolutionary understanding of God’s creation'.

Like many I co-opt Dietrich for the cause. My understood to be the ones. One in the main.

Having read him over the years, I couldn’t easily formulate where he stood on this or that? Likely, lack of concentration and assimilation but get the, searching not settling saint easily confined to conventional thinking and where needed, able to stand in the midst of differences.

Wyatt's short essay is an ideal primer into wanting more. Sets the case without fuss or filler for Bonhoffer, the progressive on science. A swift gulp, makes me want to know more. Delivered for the unconvinced but Bon-friendly.

Good for wobbling young evangelicals, looking to find approaches to the question of Genesis. With some people's 'big-man in the church' backing up.

There's Biblical lenses and scientific glasses. Been on this/Biblio side of the fence, for long enough, although curiously consider the scathing attacks on the validity of evolution in all it's claims (aside from origins). And yes, take an honest peek at the ideas, somehow and not necessarily know, how the earth could be a lot younger… not 'that' young perhaps? Or, at least humans-a-coming.

I like some of the weight and metal about them. Hearing the best of the converse view, but all this is inconsequential compared to the science we dare not call out (about). Killer S.

(Note 'we' – a term/word, to associate with all, but pushed in the margins by the overwhelming mass).

As quoted, I believe these beginnings' poems are the rhythms in which the creation rests but also prophecy for today.

Genesis is for using, more than discussing and theolo-gising. Battle-talk. Unmask and batter the powers assailed – language. There for prayer and insight into the heart of God, here and now… and to repeat, for contemporary fulfilments.

Believe in a cheesy-moon all I care, there's science that breathes on secrecy of intent. Believe that? No..? then you don't believe the evidence overwhelmingly bare and logical?

Worse, evil-S, likes to spew-out into our complacency and snigger at our acceptance. The lab increasingly being opened-up to the public. Once cynics laughed at said-nutty investigations, uncovering the dangerous. Now, it makes the tabloids, and as long as sex and sport are hot, we 'trust' things will be ok. Mr/Ms broadsheet? Too smart to get scared and side with alarmists, a prospect worse than...

Back to the article.

Admit, I probably underestimate factions arguing in the church, driven by those who've turned the Gospel into, 'go into all the…' – preach a few thousand years old.

Once thought it was a credibility shaker and might earnestly contend for the faith in carbon-dating. That people wouldn't consider the God who claimed black, is science-white. So shout, “science right” – trust me/trust God.

Now, for me, it's hunting mice while the lions roam.

I wonder how it was for Bonhoeffer to write in those days?

Genesis is dethroning the pagan gods of the ancient Near East—not revealing the scientific origin of the Earth.

That would put him in or out today, here or there. For some, what it's worth. Litmus orthodox. Today, all camped up, wings among traditional evangelicals, locked-into preserving and preaching young-earth.

The gentle line on this works best. Open and… in this, progressive. Open is progressive, whatever, oh so forward-thinking. Concluding with a scientific basis over much of the time, science-says.

At this junction I could go off on the 'main one' and how science is the enemy. Damn liars.

Repeat. Be crystal: Mainstream science is on the whole, fascist. Business and Govt. merged to steal, kill and destroy. Tooled up and taking us down.

If I can rack my brain and remember where, will post a link to a comment/truthscoop piece, where my poor rattling rolls.

Likely quote Lewis and Chesterton and, 'in the beginning was… eugenics'. They saw.

Must say http://biologos.org/about-us/ is a right and able mandate. The problem comes with the need to accommodate and court, the best of science as a witness and not rock the boat otherwise and…

SCREAM about all the subterfuge, lies and unnatural-born killing. (“Off again...” – stop/here. After six-months this is a first non-plant a seed morning. Struggling to convey. SCIENCE. The mere mention of the word).

I think people were 'that' different 100 years ago. Post-w.wars, collectively slipped into a comas of compliance. Believe Bonhoeffer and the confessing relatively-few, are undoubtedly 'Truthers' in attitude, today. Difference since, we've had some theologies spread-abroad that size-up and neuter the church. Let alone the gen. pop.

Difference. You can believe any old bunkum, and – be right about the conspiracies ripping through society like a weaponised virus. Like a hurricane. Like a… marauding army coming over the hill.

What we do with, is why, know. Matters. Or believe...? Old, young or inbetweeny earthers? Who knows the scam to end the world as we know it? Why and how?

Talk this technocratic takeover and most think science fiction. Evangelicals who nod-along, so-so-sadly, wrap it up in end-timing to take it on the chin and wait for teleporter out. Or, court the establishment's another-gospel, science-tzars. Because, they sound nice and pander to the church?

Would Bonhoeffer be awake to this? Well yes, but so would many of his day given access to the levels of once hidden info digitally exposed that we stare at/or ignore.

So how come info's here and yet most peep, put relatively uncontroversial concluding analysis, down to scaremongering and extreme?

Because it's not the info but the aptitude. I presume Bonhoeffers-kind and day, had less pressure to party-lines. Had little governing authorities. Less science-based infiltration. Were pioneering thinking and conviction. Pretence not so pronounced, not glistening on screens to suck out suspicions of elite deceit.

Here's a word: We are in the midst of one main, on the surface – and certainly 'over' the internet – battle. Perfectly summed up in 'confessing' or not.

Unlike the confessing church, the divisions are less important, or the issues we tend to argue or debate in society, than the opportunity to engage publically.

Surrounding questions of difference, we face-up and talk about. Currently the polite and formally well-educated, more-often won't touch the lepers of discussion. Why so?

We either engage with the disagreeable and other-views or we will never see truth prevail.

2016 – the year of attempting silence in the name of equality, justice and peace.

Bonhoffer not only wouldn't shut-up in this, or any name, speaking up and chosing to do something about.

I'd like to lay-off the 'cause' of our times. All times, in some ways.

But all roads lead…

Can hear the bells ringing.