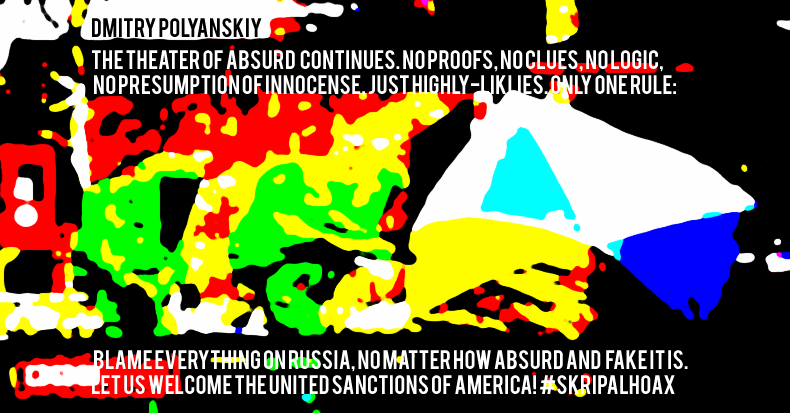 Be a ramshackle blab but said would post so bit crazy-legs but. Ah and yeah, better let it roll, let it..:

Fakery and false flagging are integral to what makes 'the news'. Media driven stories are set-up to wind-up with the intended manipulative effect.

Clear cop-out signs this the case: Details and claims of anomalies aren't presented/much or/at all.

Not anyway and in the mainstream. Not with any genuine debate or investigation. Below it so goes, the threshold for serious consideration and the attitude.

Whatever comes up gets scant acknowledgement with confident and breezy dismissal. Assumptions flow there's nothing of substance and digging about stirs already muddy waters.

One fills the gap and supposed answer for the motivation is the ever-pop. cry; "It's Anti-Semitism".

Said to be bigots locked into internet-trawling and connecting up the unsubstantiated.

Lacking nuance and a broader understanding of history. Simpletons bent on answering the complexities of politics with too easy explanations.

"Blame the Jews" becoming the final equation and hidden horror. "Lock 'em up" best solution or, "there be more gas chambers-a-coming". Etc.

The reliable stats say Anti-S. is NOT on any rise-up by the way. Why should it be?

For instance: Latest daubing on gravestones in France? Would a card-carrying "neo-nazi' type make such a counterproductive move?

Mmmm... now, who might it assist to see some Swazis in the current climate?

All this works, of course, the until con. theory slams into exposure. Whistle blow and we cannot deny some level of false-flaggery waving's going on.

Yet... once the bubble of bullshit bursts does there tend to be acknowledgement and outrage? Admittance and got had? We did get fooled... again, so throw our hands up and note the Truth?

Answer: Little or none. Don't happen. Too proud. Unless-now-gone, and too apathetic and care not to care.

Gets to show us the power of pride.

There's a connection. Not about this issue or that. About how to get good... better women and men to go along. 2+2 and equalize. This the fuel. This is demonic ether.

How about the purpose being, for ok... other, 'beings -- call them entities in our midst.

Get this strays into the metaphysical but if we go with this and could be for real? What's and why/how, does deception benefit them?

Materialist lines cite political-based incentives achieving this or that is where it's at.

Back to independent personalities existing in the unseen?

What do they want?

And are the persistent in revealing themselves as set-up incidents of national exposure intentional?

Past moves are forgotten and in one sense the Govt. sanctioned fakery scores its biggest goal. My theological and theoretics and our age... characterised, by false-flags?

All about getting as widespread and many can; Lying and bowing to flagging false or a hoax.

Sure there are strategic war aims. Ever up the divide and conquer. Push for increased State-based censorship. The need for more protection from feds and spooks. Get all that but the mass mind-control is what reckon what:

About accepting a depletion of personal integrity. Through accepting we won't look face on and get honest enough and the flags.

We hide and shy from being in error and the evidence that might confirm this. Almost always the middle-class/better educated the last targets.

Staying off all the specific news-based sites. Catch the headlines on the four or five allow-myself commentary ones. Best.

Jussie Smollett thing that happened. Go to most prominent Progressive Christian outpost. The main-man had a rant on about racism and toxic masculinity. Went back today and all gone, not-a-word of reflection. Yeah, the dishonesty and pretend nothing happened? Whaaaat and so double-down belittles any pretence at integrity.

Talk at the time was WAR.

Now the dick Donald is more and again, re half the world. At it. Talking big and stupid. All ready for new false-flags.

Primo tactic to get us going. Suggestions are it's set for Saturday.

Looking back at a Truthsccop about it note a quote from Paul Craig Roberts:

'When governments and the media are disrespectful of the truth, they destroy their credibility among the people.'

All about we disregard any self-awareness of credibility. Too proud or lost in apathy so, what the...

And the quote above is Ruskies mocking the madness.

Done. Being positive: The future isn't set and God is moving. Would that we... I - will do what.