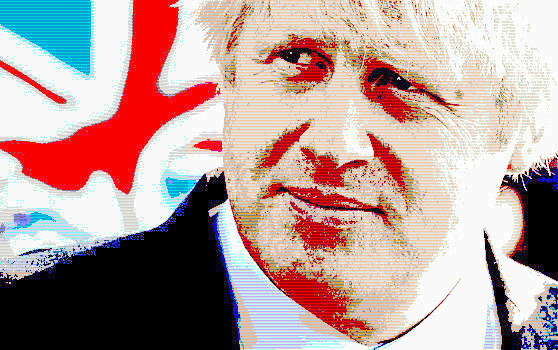 The morning after that night before. Had planned to write about Boris but only, if hope grew and he's my kind of surprisingly, somewhat redeemable, top-dog, goodie-ish. Not overly unexpectedly, his opening post-speech was back-peddling for the City masters like a pup.

Subsequent calls from the EU to "hurry up", have little/no faith, are sincere or will motivate. Could be wrong but still wonder if 'all-out looking' is what Boris is/was there to achieve? And now we'll get full-on to 'sons of gentemen'-ing through a new version of the EU etc.

Why oh why the desire to want authority figures to be responsible? (It's deep and all enhanced by m'particularly arrested development). But at the Johnson level? Who? Any contenders?

Actually – wider big-picture politics aside – warmed post-Brexit to Corbyn out of those interviewed. To stomach the rest and the pundits, for me, was one sicko-ning parade.

Farage was wonderfully inconsiderate in his first-past speech. Naming them big banks and business – would to God this would be.

Must do originals, leave comments to tweet/links… but hey for now:

Rightly said. And now Corbyn will step-up – perhaps hoping and planning all along – and become the voice for Brexit. “Until the U.K. formally leaves…” says Cameron and “no article 50” from Johnson, all leaves Out… – Not Out. Chances something happening to put the process “on hold” in two years let alone ten? Chances..? At least they can't (or will they?), put most-blame on some near-inevitable next year or so/or less, significant crashes on this referendum. But I can almost hear “in combo/but a domino” talk. Better this vote went the way – I was surprised it would – did. Throws up some good with a load of complacency rot. Symbolically, Drudge's headline had it: GLOBAL ORDER JOLTED

Interesting. How would if/this was likely to have happened? Postal votes? Or what? Once the result was in, thought the gap must have been – presumably – too large to achieve a Remain. In the early hours, re-considered what the advantages elite-wise would be, contrary to appearance and not wanting 'out'. Always half-suspected this. Just posted a comment on 21CW that mused, the now Cameron/Johnson delays, leave Corbyn the voice with others calling to “get on with it”. And what about the looming, finally-all-comes crashing down dollar etc? Probably kicking off with Deutsche Bank's collapse? But as this post notes, a million on hand-outs. This vote help? Liked hearing the roar in Sunderland at the result but... what next? Good news? Or no-better news? I dunno…

Appreciate you disclosing this. Thanks. Quite a testimony against an EU. And yes, the media has been utterly stoopidly bias. Even now/still… Don’t they get the backlash it displays?

From your ‘Day One of the Official Campaign – Brexit’ piece wanted to like-ish Boris, not believe he’s so unacceptably duplicitous – to the point it’s ‘all’ an elaborate act? Want to believe, there’s some, buck the world order at the top? Listened to those who said, he changed like the wind and got ‘in on this’ and anyway… UK, England, what have you – “won’t be allowed out”. Still thought, maybe, let’s see? Generally been growing in a somewhat disconnected hope (against the odds). But what about the immediately, “won’t be evoking article 15”? Not five minutes in/supposedly getting ‘out’ and Boris ostensibly offers, no-road to ongoing potential delays? With enough rough waters ahead, jeopardizing potential benefits of untangling? At least looking to complete, in as reasonable but prompt time-scale. Nope. It’s hope in more independence – onto the never, never? Am I wrong to think this? Or perhaps, this ‘not-so-quick out’ tactic, aims to deflect whatever might soon crash and bang and – Leave’s fault? Yet, no ‘couple of years to do it’, will cause one nasty hangover for half of UK’s pop. Corbyn is already talking otherwise and looks to capitalise on the stagnation. What next?